Babette was born in Peru, but quit the country when she was three-years old, to come back as a married woman. Daughter of a British man and a French mother, she lived in Europe and in the United States, but always going back to her beloved Peru.

My Peruvian identity. In a way I am, and in a way I’m not, Peruvian, and it’s for this reason that my perceptions are possibly neither fair, nor accurate, nor all-encompassing. I marvel though, at the tremendous hold this country has over me. What is it that draws me like a magnet and always compels me to return? What is it that can even, on occasion, prevent me from fully appreciating other countries as I compare them unfavorably with Peru. And, finally, what is it that gives me the feeling of arriving home when, as surely as a homing pigeon, I return?

Is it the people? The enormous beauty and variety of its countryside? Its capital? Perhaps its villages, so varied in atmosphere, land and customs… some picturesque, some ugly, some hidden away, others at the gates of the big city? Could it be the very special smell of Inca dust which assails my nostrils as soon as I step off the plane? Or perhaps the friendliness, on a lucky day, of the man who stamps my passport in immigration, maybe the engaging smile of the little Indian who sells me fruit in the market, or the sociability of the girl at the cash register, who at least pretends to know me, in my favorite supermarket? Or perhaps it’s because, wherever I go, I can enjoy little bits and pieces of social life; buying bread, discussing politics with the taxi driver (they keep me up to date!), exchanging greetings with neighboring acquaintances, passing the time of day with fellow sufferers waiting for hours to see doctors, dentists or lawyers… or encountering twin souls, united in rage, in the queue at the bank …? Or is it simply because it warms my heart to see friendly faces wherever I go, whatever the circumstances? 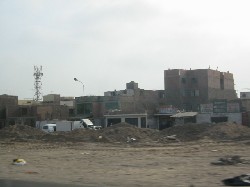 Why do I accept, with the resignation of habit, filthy streets full of potholes, dust which covers all the vegetation, rubbish piled on corners, the infernal traffic, the lack of civic sensitivity, sad-looking, deteriorated buildings, traffic lights which don’t function, the police, notorious for their absence, deserted houses with abandoned gardens and the totally depressing general aspect of poverty and abandonment, all a direct consequence of repeatedly unsuccessful government policies…?

Why don’t I weep, as do all those who arrive in this country for the first time, at the sight of children working in the streets, the older in charge of their siblings, begging, trying to clean the windows of cars they can barely reach, selling candy or whatever happens to be available, playing and sleeping on a bare meter or so of grass or pavement between rows of intense traffic… How can I bear to see the lame and the ancient, hobbling around on crude, homemade crutches or in primitive, barely-functional wheelchairs or pushcarts; the paralytics, legs flopping, or the Indians in their full skirts, hats and rubber tire sandals, with or without families, searching for their El Dorado, pathetic, lost in the big city, homeless, no land, nothing… using their small children to earn a pittance while the mother suckles her latest baby and watches with dead eyes… 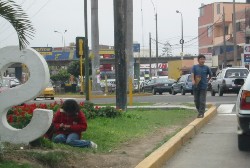 What reconciles me to the dangers we face every day, to the threat of being attacked, often by the very same poor, miserable, lame, beggars and Indians who in turn become the perpetrators of the multiple assaults the population suffers? How can I live, knowing that at any given moment, walking in the street, taking a taxi, going out at night or watching television in my own home, I’m a potential victim of whoever decides to steal anything, from my cheap watch, to my car and the contents of my home… What’s wrong with me that I’m still capable of feeling joy and satisfaction each time I return to this depressing panorama of poverty and chaos… 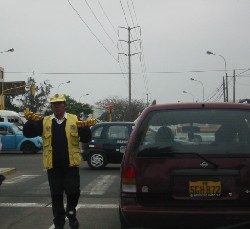 Could it be that, in spite of everything, I see a country with enormous charisma. I see a relaxed people, tense expressions rare, nobody in a hurry. Even during moments of fury and rebellion, when the poor react burning tires, throwing stones, breaking windows, looting, destroying… they appear to be enjoying themselves; television cameras register their laughs. Brick in hand, poised and ready to be hurled, it all seems a game… even when fighting for their rights! This isn’t good, but it’s also an indication of incredulous passivity and lack of aggressiveness…not good either. This lack of drive and ambition saddens and worries me. 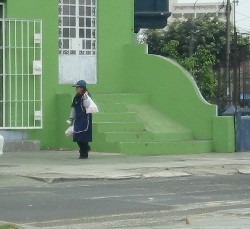 Nevertheless, I find it impossible to avoid reflecting upon the frequent lack of warmth in northern countries, where individuals are numbers, where people are unable to slow their pace enough to exchange a few pleasantries, to relax, to forget the time, to postpone duties and obligations or to take a sincere interest in their fellow men; where no-one understands that any excuse is good enough to waste some time and where to be hospitalized is to get lost in a mass of humanity. Can stinginess with smiles and friendliness be preferable? Or efficiency, punctuality and order take the place of kindness and warmth… or even affection? The national tendency in Peru, is to be warm and sociable, and everybody deserves, at the very least, respect.

Or is it my fascination with the art of this country which holds me in its grip? However humble, everybody is a born artist. The vendors who sell hats by the roadside on the way to the beaches display them, along with parasols and soft drinks, in a glory of color and gaiety worthy of an art gallery… ignored by the thousands who flash past with indifferent eyes. Their artistry and creativity are revealed in every form of handwork and this exceptionally artistic vein allows even the poorest and least educated to produce wonderful works of art, using the simplest of materials; seeds, bones, wood, teeth, mud, wool, shells, vegetables, natural dyes, and of course silver… anything and everything goes! They can’t be beaten in their skill to produce something from nothing, to rescue and restore what’s long-since been discarded or thrown away, or to put to use what’s literally falling to pieces. 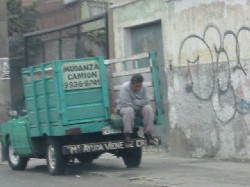 Could my devotion to Peru have something to do with the confidence I have in the medical profession, whose doctors, in spite of lacking at times the very latest in equipment, also use their imagination and art to make miracles, daring to attempt feats most doctors in Europe or the United States, would never even take into consideration… I know of a surgeon, for example, who successfully performed an extremely delicate spinal operation using a dentist’s tool, an operation which doctors abroad had refused to consider. Mechanics do no less, reviving old cars, or abandoned motors, or using them as spare parts for newer editions; likewise electricians, plumbers, and their like who rescue long since neglected food processors, TV sets, irons, toasters and similar household objects, often using ingeniously home-made tools, adapted from the handle of an old hammer, used nails, whatever’s handy, to do so… and also managing miracles. 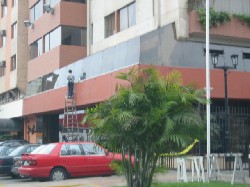 Maybe part of my affection for this country is the result of finding myself both entertained and irritated by what can be considered a national pastime… as natural as eating and as compulsive as any game of chance… HAGGLING. There’s an infantile joy involved in getting something for nothing, three for the price of one, another encore, and yet another, and another. A game which is often taken to extreme, and sometimes embarrassing, levels. Or else because, on the other hand, the incredible generosity of Peruvians, to be found at all levels, provides such a contrast… even the poorest of the poor can always find something to offer as an ‘atención‘, a glass of juice, a flower, a piece of cake, anything to prevent a friend being left empty-handed… 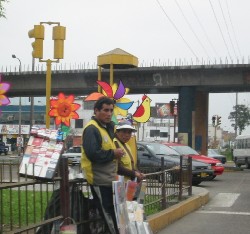 And finally, might it be the impressive variety and choice of FOOD here! The markets with their gorgeous displays of fruits and vegetables, most available all year round, another art gallery… the awesome and wonderful selection fish and shellfish, envy of international chefs… the paltas I miss so much whenever I’m away, and have YOU tried palta in consommé?… delicious! And the black olives, unique, with a flavour all their own… and delicacies such as traditional ceviche, or escabeche, and nowadays tiradito… and camarones in ANY form, octopus with black olive sauce, caucau, hot pepper, cilantro…

But enough, or I’ll never stop! All this, and so much more, I miss whenever I’m away… need I say more?

? We are joking of course, but there is something we would like to tell you. You might have noticed that Expatclic has no ads or paywall. For 17 years we have been working voluntarily to provide quality contents and support to expat women all over the world. However, keeping such a big website going has some costs, which we partially cover with team member’s fees and donations of those who appreciate us and wants our work to continue. If you could give even a tiny contribution to cover the rest, we would be immensely grateful ♥ You can support us with a small donation, even a small one. Thank you so very much.
12 September 2005 at 23:53
Peru, Testimonials
abroad, culture, different culture, food culture, identity
Anna Cereti
Subscribe
Login
0 Commenti
Inline Feedbacks
View all comments