Our friend Paola Fornari lived in Uruguay, where she discovered mate and matear  – and also chusmear 🙂 We thank her for allowing us to publish the article she wrote at that time. We believe this is the perfect example of how being involved in the traditions of a different culture can help you get close to it, and get to know it deeper.

‘Let’s sit on the zaguán,’ my friend Rosa says. The zaguán is the space between her front door and the street. We squeeze out two plastic folding chairs and a table. I’ve been invited to matear, Uruguayan style.

Mate, pronounced maté, is a national social pastime here. The mate is a hollowed-out calabash gourd: you fill it with a bitter, dried leaf called yerba, add boiling water, and sip the brew, also known as mate, through a bombilla – a silver straw. A set of mate, yerba and bombilla is also referred to as mate, and the verb, matear, means to sip mate.

There are rules: you carry your mate in your hand and your flask under your arm, or you put everything in a leather case called a matera. You can’t order mate in a bar – it’s something personal which you pass around your friends. Groups of young people sit in parks, chatting, enjoying the sun and sipping away. In street markets, or even in business meetings, people clutch their calabashes. Kiosks sell hot water to refill flasks. During summer months, when Uruguayans hit the beaches, first aid centres are set up to deal with the mate burns.

Rosa pours cold water onto one side of the leaves, digs a hollow with her straw, and starts sipping. 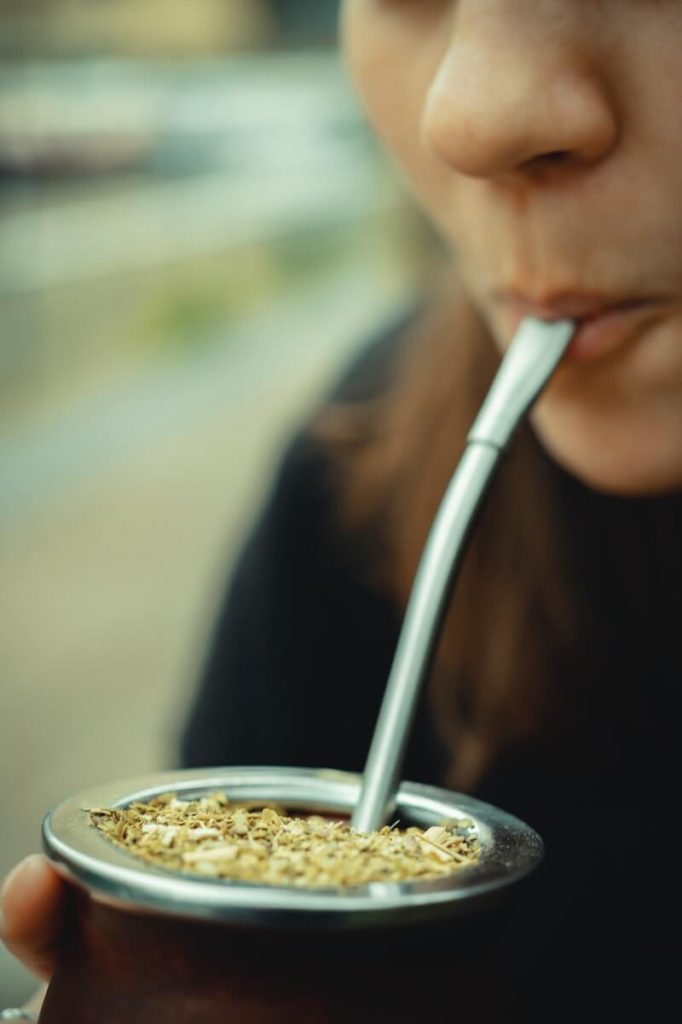 Photo by Alexandre Debieve on Unsplash

‘The leaves have to hinchar, to swell. You use cold water at first, otherwise the straw clogs up. I’m the one inviting, so I sip till the temperature is right. It’s rude if I give it to you lukewarm.’

She sucks, and when a gurgle indicates she has drained her brew, she fills it with boiling water, slurps again, checking the temperature, refills, and hands it to me. I sip. We chat. I learn that it’s impolite to hand the mate back before the last drop of water is finished. You need that slurpy noise.

‘Yuk! You don’t want to sip someone else’s water!’ Rosa says. I wonder about the hygiene of the operation. ‘Most people share with anyone. But I’m selective.’ I feel honoured. ‘I’m the hostess, so I fill. And we chusmear. We gossip about passers-by.’

‘Rosa, if gossiping is part of matear, I’ll go for it.’

‘See that woman? She’s asquerosa.’ I wonder why she’s nauseating. ‘She moved into the area and rebuilt the house next door. Loads of money. Moans all the time: says my pipes are wrong, my bathroom is making damp seep into hers…’

A man walks by. I nod and say ‘Buenas tardes’.

‘No, don’t greet, just smile. Don’t say anything unless you know the person.’

‘Okay, don’t say anything unless I know them. You have to differentiate between those you know and those you don’t.’

We pass the mate back and forth. Every few fills, Rosa shifts the straw around the wet leaves.

‘Ah, poor Alicia, she’s the first of twelve siblings. When she was fifteen, and her youngest brothers, twins, were a few months old, her mother gave one of them away. Can you imagine? She handed him over to a stranger, then left. With another man. Alicia didn’t see her mother again till last week, at a funeral. Alicia’s kids refuse to call her grandma. Can you blame them?’

Is this me, talking about other people’s affairs, and judging?

Rosa pours the last drops from the flask, and sips the mate del estribo, the dregs.

Carrasco Norte, how the other half live

? We are joking of course, but there is something we would like to tell you. You might have noticed that Expatclic has no ads or paywall. For 17 years we have been working voluntarily to provide quality contents and support to expat women all over the world. However, keeping such a big website going has some costs, which we partially cover with team member’s fees and donations of those who appreciate us and wants our work to continue. If you could give even a tiny contribution to cover the rest, we would be immensely grateful ♥ You can support us with a small donation, even a small one. Thank you so very much.
8 September 2020 at 15:00
Traditions, Uruguay
cultural adaptation, culture abroad, different culture, expats, life abroad
claudiaexpat
Subscribe
Login
0 Commenti
Inline Feedbacks
View all comments

Carrasco Norte, how the other half live