Claudiaexpat shares some information about music in Jerusalem.

Music, like most things in Jerusalem can be discovered, enjoyed, shared in a wide variety of different places and situations; from an ancient church to a modern theatre, an intimate concert to a big festival.

While in West Jerusalem music (particularly classical music) is highly regarded and extensively practised, in the East it is slightly more difficult to find music promoted so widely. A full and serene cultural development is hindered by the objective difficulties the Israeli occupation imposes on culture. Having to move around in more and more restricted and disputed territory, living a life marked by a thousand problems that keep people busy with practical matters, makes the love of music a difficult choice to practise. However there are some niches where even in East Jerusalem, not only classical but all genres of music, are appreciated and continue to move deep emotions.

Some festivals, classical music in particular, take place in East Jerusalem. They are highly regarded both for their quality and for the level of the performing musicians. Particularly appreciated are those of the Ecole Biblique (Bible School) of the Church of Saint Anne, and of the Centre for Jerusalem Studies. The latter uses external structures (for instance the al Hind al Husseini College Theatre Hall in Sheikh Jarrah). Occasionally, the very beautiful Hammam Al Ayn is used to host high-level international musicians. The church of Saint Anne enjoys unparalleled acoustics. It was the acoustics that saved it from certain destruction during the crusades. It was rescued and turned into a Koranic school. It is presently run by the White Fathers, a French religious congregation. I will let you use your imagination to consider what is experienced in listening to a concert of baroque music amongst the vaults of this huge church. Its acoustics are so perfect that even tourists take advantage of it, and cannot resist singing songs while they visit the ancient ruins – only religious songs, though! 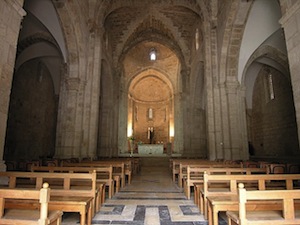 The church of Saint Anna

For information about the cultural programmes:

Centre for Jerusalem Studies: https://www.jerusalem-studies.alquds.edu/. Join their mailing list. The centre is situated in the Suq al-Kattanin (Cotton market), in the Muslim Quarter near the Temple Mount. To get there, enter the Old City from Damascus Gate and continue straight, keeping to the left side of the road; you will find the entry to the old caravanserai that hosts the market (and the centre), after 400 metres.

Ecole Biblique: https://www.ebaf.edu/. Its cultural initiatives are spread by the French Cultural Centre Chateaubriand (https://www.ccfjerusalem-chateaubriand.org/, join their mailing list. It is situated in Nablus Road, near the Jerusalem Hotel and the bus station.

Church of Saint Anne: you will find on the right when entering the Old City from Lions Gate. The French Cultural Centre has details of all concerts.

Other concerts (for all kinds of music) are sporadically hosted by the Palestine National Theatre (https://www.pnt-pal.org/) and the Yabous Cultural Centre (https://yabous.org/).

The Edward Said Conservatory (https://ncm.birzeit.edu/), more about that later, organises concerts (not only classical) and promotes interesting intercultural music initiatives.

In the West the leading place for music is the Jerusalem Theatre (https://www.jerusalem-theatre.co.il/), a huge cultural complex that hosts a theatre, several movie and concert halls, spaces for exhibitions and much more. Its website is always thoroughly updated with all initiatives that also include a number of concerts of musicians from all over the world. From time to time, afternoon sessions of classical music concerts are organised. In order to be fully informed about all concerts in West Jerusalem, I suggest you look at the Friday inserts of Haaretz (https://www.haaretz.com/).

A must for choir lovers is the Armenian mass in the Church of Saint James in the Armenian Quarter of the Old City. You can attend at 6:30 am or at 3 pm – the rest of the day the church is closed to the public.

If you, or your child, are learning to play a musical instrument, there is no reason to stop doing so in Jerusalem. The only thing preventing you from continuing your musical studies would be that you play a very rare instrument, or you chose not to study with music teachers coming from one, or the other side of town.

In the East the music school is the Magnificat Institute (https://www.magnificat.custodia.org/, Tel:02.6266609 e-mail: magnificat@custodia.org“> magnificat@c), run by the Franciscan friars (ask for Padre Armando). A very lively and serious school inside the Old City (enter from New Gate and you find it immediately on your left), where you can have piano, viola, cello, guitar, drums, singing, flute or organ lessons, music theory and composition in a mixed and motivated environment. The Magnificat, has an agreement with the A. Pedrollo Conservatory of Vicenza, Italy. 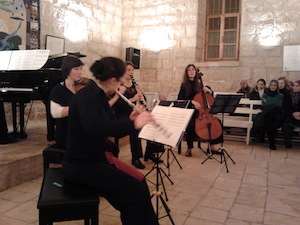 The already mentioned Edward Said Conservatory has several places to study in Palestine. In Jerusalem you can find it in Al-Zahar Street, a beautifully restored house a few metres just opposite the Yabous Cultural Centre. Telephone numbers are 02 627-1711 and 02 626-3230. It also has a much smaller site easily accessed from the car park exactly in front of the Christmas Hotel at the end of Salah Addin. Here you can have lessons of wind instruments and percussions. The Conservatory is unique in its characteristic. Its director is an Italian, Michele Cantoni, and it promotes varied and interesting events aimed at maintaining a high level of music in the young Palestinian population. It actively encourages exchange with other cultures.

In the West there is a school of music (there are a lot, every neighbourhood has some, but this one was recommended) in Emek Refaim, the big avenue of the German Colony. It can be found on your right about 600 metres along the street, coming from the city centre.

For private teachers I suggest you contact the international schools or the above mentioned music schools. Bare in mind though that Israeli musicians won’t always go to East Jerusalem neighbourhoods – I don’t know whether the same applies the other way around.

I have the impression that the general tendency is not to go give private lessons at home, but to welcome students in schools or private houses. If you do not want to join a course within a music school, you can also enquire in music shops in your vicinity to supply names of private teachers.

In the West, there is a large musical instruments shop inside the shopping mall, exactly in front of the Mahane Yehuda market. They sell all sorts of instruments and musical equipment.

If you want to stay on the Palestinian side, I suggest you to go to Bethlehem, where within a few metres, you find two very well supplied musical instruments shops. One is called Yamaha, the other Valentino, and they are both on parallel main roads that lead up to the Nativity Church. In Beit Hanina there is Silverstone, 200 metres on your right before the traffic light where you turn to go to Pizgav, coming from the centre (near the Yellow gas station).

In the Old City of Jerusalem you can find simple and traditional instruments, like drums, small guitars and other percussions. If you are looking for the classical small flute for your child’s music lessons at school, you can find it in the above-mentioned shop in the West or at the Educational Bookshop in Salah Addin.

I cannot end this article without mentioning the Baremboim Said Foundation (https://www.barenboimsaidusa.org/) that has been supporting music and musical education in Palestine and Israel since 2003. The idea was borne out of an encounter between two great artists, Edward Said, a Palestinian from Jerusalem, and the Argentinian Daniel Barenboim, who in 1999 created the WEDO Orchestra (Western-East Divan Orchestra), formed by Israeli, Arab and Spanish musicians. The aim of the orchestra is to demonstrate that barriers fall away in the universal language of music. What makes peace impossible in this tormented region are barriers created by men. The orchestra and the foundation are very active; they promote workshops, encounters, concerts, etc.

Last but not least: The Dam

It’s a Palestinian hip hop group founded in 1999 by brothers Tamer and Suhel Nafar with a friend, Mahmoud Jreri. The Dam were very successful with their single Meen Irhabi – Who is the terrorist? It’s an open denunciation of the abuses of the Israeli occupation, which immediately became the symbol of Palestinian resistance amongst the young. The Dam has become very famous and they move between Palestine, where they inspire the young on their musical path, and abroad (every year they play somewhere in Europe). The themes to their songs are justice, violation of human rights, the occupation, poverty and women’s rights. In 2008 Slingshot Hip Hop (https://www.slingshothiphop.com/), was created. It is a documentary that talks about Palestinian hip-hop and focuses particularly on The Dam, following them on their musical path, and showing the difficulties of being an artist under the Israeli occupation.

Renting in Jerusalem: East or West?

Swimming in Jerusalem: East or West?

? We are joking of course, but there is something we would like to tell you. You might have noticed that Expatclic has no ads or paywall. For 17 years we have been working voluntarily to provide quality contents and support to expat women all over the world. However, keeping such a big website going has some costs, which we partially cover with team member’s fees and donations of those who appreciate us and wants our work to continue. If you could give even a tiny contribution to cover the rest, we would be immensely grateful ♥ You can support us with a small donation, even a small one. Thank you so very much.
27 January 2013 at 9:41
Palestine, Travels
art, education, Jerusalem
claudiaexpat
Subscribe
Login
0 Commenti
Inline Feedbacks
View all comments

Renting in Jerusalem: East or West?

Swimming in Jerusalem: East or West?