Not Being There when Losing a Parent: Moci’s testimonial

Home > Family and Children > Family Back Home > Not Being There when Losing a Parent: Moci’s testimonial

In this touching article, Mociexpat shares her feelings for the death of her father, which occurred when she was on holiday in Italy. Universal feelings when losing a parent from far away.

Since I was a little girl, I remember being afraid of losing my parents. I am not sure how it happened, we suspect it was after a visit to a cemetery, but I remember waking up at night stressed about growing up and seeing my parents die. I even remember wanting to die first so I didn’t have to see them go. I never liked talking about their death (and my father, on the contrary, spoke about it so freely it made me very nervous). This fear of mine kind of “disappeared” when I became a mom myself. At that moment, I started feeling that it was more important to keep my daughters and myself alive.

I became an expat in 2008, after marrying my Italian husband. I am a very optimistic person (and my parents were still young and healthy) so I was never the kind to worry about a call, I never expect the worst. After several years, in 2016 I returned to Lima temporarily. It was a great opportunity to give my daughters the chance to experience having an extended family (and also, giving my parents the chance to be full time grandparents).

In July 2017, 3 days after I had already left for vacations in Italy, my father was diagnosed with stage 4 lung cancer. I wasn’t that surprised. I was expecting him to have something bad, though maybe not that bad. The moment my brother called to give me the news, I felt like somebody had put and “Expires by” stamp on my dad. Though the devastating news was that he would eventually die of that cancer, I never expected him to die only 10 days after.

I was sleeping when my husband woke me up. My brother had called, he thought it was a mistake and didn’t take the call at first but when he saw he insisted he took it and handed the phone to me. My father was gone. He had some kind of heart attack or something after having lunch and didn’t make it to the hospital. Earlier that day he had been talking with my mom about how much they like their house, and how they (she) would be ok even if he quit working. The day after he was supposed to start his treatment. 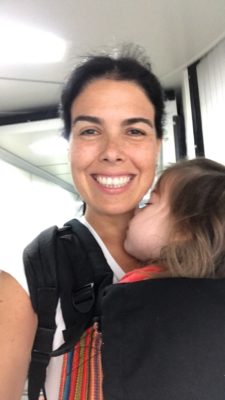 After the news I went into “logistics” mode and started planning my return home. I had to say good bye. There were no tickets for all of the four of us so we decided that I would go with my younger daughter (whom I was still breastfeeding at the time) and the older one would stay with my husband enjoying the vacations we had planned.

The trip was weird. In a way it was like a normal trip (I even shopped at the duty free – later my therapist explained it was a defense strategy from my brain to numb my feelings), then I would cry in the airplane. When I arrived, an aunt and my brother’s girlfriend were at the airport. I was so afraid of arriving at the funeral. I left my daughter at home and went directly to see my father. It still hurts to remember that I could not touch him again, that I had to just see him through a glass. For months, I held on to that sight of him, even if he was already dead, not wanting to forget his face (now I usually remember him alive).

It still bothers me a lot that I was away when this all happened, since I was living in Lima!!! I missed seeing all the people that went to pay their respects, I missed being hugged by my family during the first hours (don’t take me wrong, my husband and the friends in Italy were so nice to me but it was not the same), I didn’t go through the first hours of his departure with my mom and brother.

Still now, we are dealing with some consequences of how this all this happened. My eldest daughter still suffers from what she lived as an abandonment on my part. She is afraid of losing me and has had trouble going to school because of this, she has also become very jealous of her little sister. I don’t feel guilty for this, how would I have known? Obviously, I would do things differently now, but back then I did the best I could in the circumstances I was given. 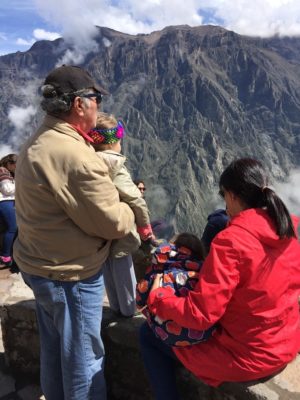 But not everything is sad. I am not going to say the pain is gone, of course it hasn’t. I still cry from time to time (like while I write this article) but I can also say some positive has come from this awful experience. For one, I have faced one of my greatest fears -losing a parent- and I am still here. I am still happy. Sure, I miss him and always will but my capacity for happiness has not changed at all. His loss (just as his life did) has taught me how to live better, how to live fully. I have come to know my dad better after his death, too. This usually made me sad, now it doesn’t. I have discovered a lot about our relationship since he is gone, and also about how much of him there is in me (thanks therapy!).

As for my mom, although she misses my father every day, his absence has given her the opportunity to live her life on her own terms, for the first time in her life. She lives for both now and has fulfilled some of his dreams (like going to China!).

As I said, we are still struggling with the consequences of leaving my oldest daughter behind but even there I see an opportunity: dealing with this has given my husband and I the chance to become better parents, to close the gap between our different cultures and parenting styles. At first I thought my father had to be very sad seeing his granddaughter going through all this pain but then I realized he is not, he is ok with how everything has turned out because wherever he is, he knows this is how it had to happen and that everything will be OK in the end.

You can find an open letter I wrote to him here (in Spanish).

A reflection on the importance of being “nonni”

When the farewell is a goodbye – mourning in expatriation

Family visits and vacations – finding the balance in traveling

? We are joking of course, but there is something we would like to tell you. You might have noticed that Expatclic has no ads or paywall. For 17 years we have been working voluntarily to provide quality contents and support to expat women all over the world. However, keeping such a big website going has some costs, which we partially cover with team member’s fees and donations of those who appreciate us and wants our work to continue. If you could give even a tiny contribution to cover the rest, we would be immensely grateful ♥ You can support us with a small donation, even a small one. Thank you so very much.
19 February 2020 at 17:16
Family Back Home
expat life, family
claudiaexpat
Subscribe
Login
3 Commenti
Inline Feedbacks
View all comments

Great article. I’m not an expat, I migrated to a very far away country and I know someday I will have to go through this when one of my super heroes leaves this world. My public and constant admiration to you Moci.

Thank you so much Ricardo for your lovely words

I am so sorry for your loss. I couldn’t stop crying while reading your article. This is always my fear as well, when I imagine something happens to my parents while I am abroad. Normally I tried to avoid thinking about it and hoping for the best. But I know one day it will come and it is scary. Thanks for sharing.

A reflection on the importance of being “nonni”

When the farewell is a goodbye – mourning in expatriation

Family visits and vacations – finding the balance in traveling