Home > Europe > Italy > A tale of two cities: The story of Katherine, an American who fell in love with Naples

Katherine Wilson is a North American actress, writer, and mother of two who is in love with Italy. She moved to Naples after college, when she felt she wanted an experience abroad, and has stayed on. Today she lives in Rome with her family. In this fascinating article, she talks about the two cities that have welcomed her. Warning: Highly contagious content! Thanks a lot, Katherine.

I moved to Italy right after college, ready for a three-month experience abroad. The choice of Naples wasn’t a logical one. Americans that I knew advised me to go somewhere more “civilized”: Naples was dirty, corrupt and chaotic, they said. I was immediately intrigued. It sounded so different from the clean, efficient East Coast of the U.S. where I grew up. I was ready for a change. 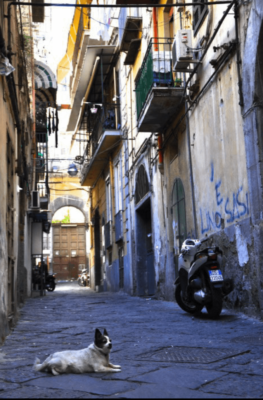 The biggest challenges for me at the beginning were exactly what I loved about the place. The lack of efficiency and organization made it difficult to get across town or pay a bill, but at the same time opened the way to unexpected moments of beauty and humanity. A full bus I was on left its route to take me to the hospital one day when I fainted; waiting in line at the post office was an opportunity to meet and talk to people who were characters straight off a theater stage. I guess the hardest thing for me was having to renegotiate my relationship with time: in the U.S., I was always looking at my watch, fearful of being late. In Naples I learned that no-one was a slave to the clock, so I couldn’t be either. I could live out my day con calma, and the world would keep turning! (Of course, my reference to organization and efficiency doesn’t apply to food preparation and consumption – in that sphere, Neapolitans are some of the most organized people on the planet!).

I was seduced by Naples in a way that was very sensory. The city’s beauty, sounds, smells, and especially tastes grabbed hold of my body before my mind even knew what was happening. I found that people around me were alive in a way that I hadn’t experienced before, and in myself I felt a vitality that I didn’t want to lose. I went back to the US briefly, and immediately was hungry: hungry for the beauty of Italy and the way I was able to live in my own skin here.

I have to say that I love both cities, Rome for its history and unparalleled beauty, and Naples for its humanity.

I’m an actress, so I’ve always loved taking on new identities. I found that I was developing an Italian persona who I actually liked a lot more than my American one! She was happier, more loving, and much less critical of herself and others. She was also able to enjoy life in the present. 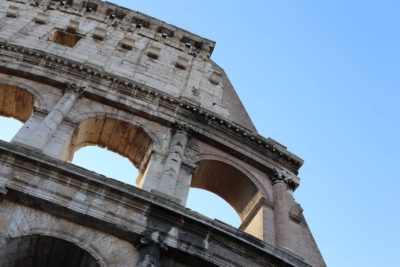 After living in Naples and briefly in northern Italy, we moved to Rome. As an American, I had always imagined that Rome and Naples, two cities that are a one hour train ride apart, would be very similar culturally and linguistically. I could not have been more wrong! Italy is a very new country, and the cities that make it up have existed for thousands of years. Rome and Naples are as different as two countries. The biggest difference I would say is the fact that Rome was the seat of the Empire: Romans’ outlook is always that of the conqueror, the citizen from the center of the world. Naples, on the other hand, has always been dominated — since the time of the Greeks. What emerges is a culture of distrust of authority, creativity, and acceptance of difference.

I have to say that I love both cities, Rome for its history and unparalleled beauty, and Naples for its humanity. Romans are sometimes a bit full of themselves, and not quite as open to accepting others who are different. It’s incredible to me that so many Romans have never set foot in Naples – they believe the stereotypes that it is dangerous and dirty. They are really missing out.

Katherine Wilson
https://katherinewilsonwriter.com/
Rome, Italy
April 2018
Photo credit ©KatherineWilson except
the one of the Coliseum by Chantel Lucas on Unsplash

Demystifying mammoni and Italian mother-in-laws: The story of Katherine, who married a man from Naples, Italy.

? We are joking of course, but there is something we would like to tell you. You might have noticed that Expatclic has no ads or paywall. For 17 years we have been working voluntarily to provide quality contents and support to expat women all over the world. However, keeping such a big website going has some costs, which we partially cover with team member’s fees and donations of those who appreciate us and wants our work to continue. If you could give even a tiny contribution to cover the rest, we would be immensely grateful ♥ You can support us with a small donation, even a small one. Thank you so very much.
16 April 2018 at 2:58
Italy, Testimonials
abroad, different culture, expats
claudiaexpat

Demystifying mammoni and Italian mother-in-laws: The story of Katherine, who married a man from Naples, Italy.