Writing at the castle: an interview with Sylvie Gormezano

Home > Europe > France > Writing at the castle: an interview with Sylvie Gormezano

Come and meet Sylvie Gormezano and her passion for art communities. Sylvie introduces us to Writing at the Castle, a wonderful retreat for writers in the south of France.

You were born in France, but you consider yourself an expat in France: can you tell us a bit about your story?

My parents were French, from Nice, but I was born in London and taken to live in Sao Paulo, Brazil at the age of two. By the time I came back to France in my early teens, moved to Bristol in the UK  for university and subsequently worked in London and Brussels, I have been an expat many times over and it has become harder to decide which country is home and “patrie”!

In some ways it feels strange for me when I’m in France because, although it very much feels like my home country, I am also a stranger there as having been away for so many years, there are things I notice about culture and language that have evolved or are new that I am not familiar with. So yes, in a way I do feel that I am an expat in France, having lived the longest in the UK.

You are the chair of AWAD – can you tell us about this project and what it means to you?

AWAD is the Association of Women Art Dealers and was set up  by Susan Mumford, an American art dealer newly moved to London, who was frustrated that there was no group or network that provided a collaborative support to women entrepreneurs running art galleries.

The art world can be very closed in the UK and certainly seven or so years ago, was a very difficult area to break in to successfully, especially as a woman.

What I particularly admire about the Association is its support and guidance for new art businesses run by women. We provide a mentoring scheme where more experienced members  share expertise with new art entrepreneurs and so also raise the collective knowledge and professionalism of the whole Association.

There are now around 75 members, many of them expats in London, with AWAD chapters in London and New York, as well as other members scattered around the globe, including Berlin, Zurich, Hong Kong, Mumbai and Vancouver.

It is a real example of how productive a collaborative environment can be for businesses and individuals to flourish and there are many instances where, rather than compete against each other, members have worked together to their mutual benefit. And, they are a great group of people! 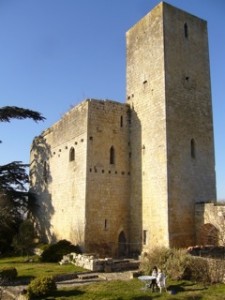 You also organise literary retreats for small groups of writers in Gascony, South West France. The programme this year looks particularly interesting. Can you tell us how the idea came about and why are these retreats ideal for expats?

The literary retreats are a new venture for me. We organised the first Writing at the Castle retreat with tuition last year as a bit of an experiment and its success prompted me to build on that and make it an annual event.

The inspiration came partly from the venue we have -a Medieval ruined 13th century castle in beautiful gardens (and swimming pool!),  with a fine stone 18th C. Chartreuse house to accommodate writers-  and partly from a desire to offer an inspiring environment away from everyday distractions and frustrations in which to hone writing with the support of equally inspiring professionals able to  give real practical help and individual advice.

Just  having lively discussions around the dinner table under the stars was inspiring!  The Castle was used for readings from the writers’ work by a professional actor on the last night: it was really wonderful to hear words that had only existed on the page come alive. I think it was the highlight of the week for many!

The working language for the retreat is English, so good for the many English language expats living in France and neighbouring countries, who don’t have to travel too far. Just as for AWAD, building collaborative communities, whether for art or for writers is extremely rewarding- you immediately see the benefits of sharing ideas and experience.

This year, our tutors include Amanda Hodgkinson, award winning author of 22 Britannia Road, who is herself an expat in France, as well as translator and independent publisher Alessandro Gallenzi of Alma Books, an Italian expat in London. Jason Hewitt, actor, playwright and author will mentor over the main days of the retreat and, as last year, the talented Oliviero Papi (Australian-Italian living in France) of Obra Company theatre group will voice readings in the castle on the last night on July 8th. This year Writing at the Castle is from July 2nd to July 8th.

Do you live permanently in France, or do you move around?

I am based in Richmond, South West London and in Sainte-Mere.  Most of my art related work is London centric, but I aim to spend as much time as possible in France. One future project is to set up art retreats in Sainte-Mere too.  Living in two places at once is not straightforward, although the internet and the ability to join in meetings through Skype certainly help. I still need to work on that, but on the days that I am sitting at my laptop in the sun looking out towards the Pyrenees, I’m certainly not complaining! 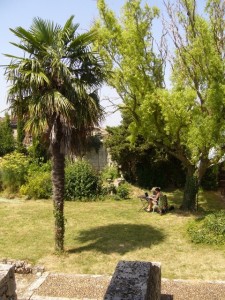 Are you a writer yourself?

I wouldn’t call myself a writer in the sense that I don’t have the ambition to be published, but writing has always been part of my life one way or another since childhood. I won some writing competitions as a student and always had some writing on the go for many years. I think I realised early on that I am much better at encouraging and coaxing the best creatively out of other people than producing outstanding output myself, so I have gravitated towards being facilitator for artists and for writers, which I find to be creative in its own right.

I have plans to extend the life of the annual retreats Writing at the Castle by creating a network of alumni and tutors that  can keep in contact virtually or through a series of talks and events and continue to share and exchange ideas as well as informally review each other’s work. So, even if I’m not writing myself, I hope to be contributing to facilitating some great creative writing!

? We are joking of course, but there is something we would like to tell you. You might have noticed that Expatclic has no ads or paywall. For 17 years we have been working voluntarily to provide quality contents and support to expat women all over the world. However, keeping such a big website going has some costs, which we partially cover with team member’s fees and donations of those who appreciate us and wants our work to continue. If you could give even a tiny contribution to cover the rest, we would be immensely grateful ♥ You can support us with a small donation, even a small one. Thank you so very much.
13 May 2016 at 8:16
France, Work Abroad
art, Project, Women
claudiaexpat
Subscribe
Login
0 Commenti
Inline Feedbacks
View all comments