Home > Asia > Bangladesh > Bangla butterflies, or how butterflies can help you abroad

In this lovely article, Paola, long-time friend of Expatclic, opens her window on Dhaka, where she lived four wonderful years, and tells of how she discovered Bangla butterflies and how they helped her.

When I moved to Dhaka, the capital of Bangladesh, I was determined not to fall into the expat book-club-mahjong-bridge-pilates routine. No, I would learn to speak Bangla; I would integrate; I would wear swishing saris and henna my hair. And I would explore every corner of my new city.

Indeed, I did pretty well, and I got huge fulfillment from my efforts, but I never expected it to be so exhausting. The reality on the ground did not make it easy.

In 2012, the second year we were there, Dhaka dropped a position from second-least to least livable of 140 cities surveyed, according to the Economist Intelligence Unit. The ratings were based on thirty factors across five broad categories: stability, healthcare, culture and environment, education and infrastructure.

Traffic was the most ‘in-your-face’ difficulty. Whereas smalltalk in many countries generally revolves around the weather, in Dhaka it was about traffic. There was no underground transport system, and no skytrain. The city’s population of fifteen million was increasing by half a million a year. Up to half a million rickshaws vied for space with buses, taxis, cars and trucks through dusty fume-clogged roads. According to a 2011 government report, supposedly moving traffic was at a standstill for seven hours a day. Peak traffic hours were from eight in the morning to ten at night with no letup.

On a reccy to the state-of-the-art Apollo hospital, four miles from my home, I covered just over a mile in forty-five minutes, and was blocked in a sea of honking vehicles. The most disturbing aspect was that above the cacophony of horns, a plaintive whee-aw-whee-aw filled the air and pierced deep into my bones. An Apollo Hospital ambulance was stuck behind me. I imagined myself in it.

Somehow, over the next hour, in floods of angry tears, I managed to extricate myself from the tangle, and get back home. 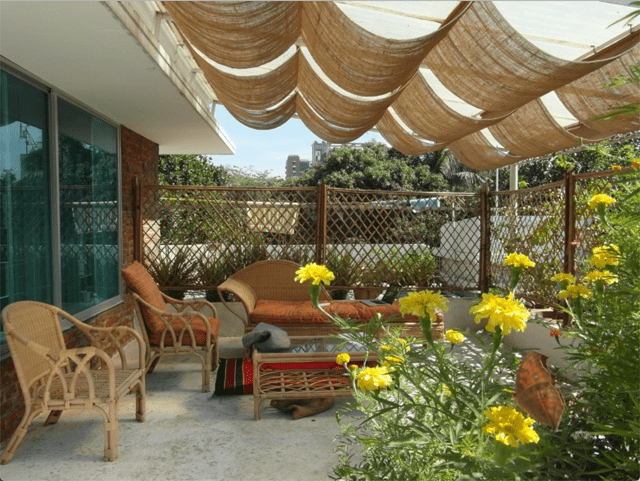 I went up to my rooftop to think and recover. I didn’t often go there, because of the constant noise of cement mixers, hammers, drills and chainsaws from surrounding building sites. 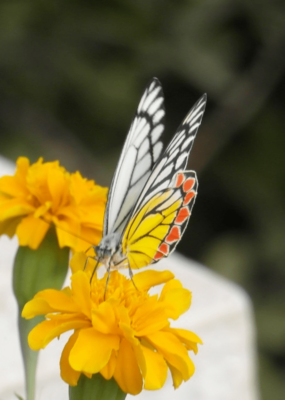 A wonderful sight greeted me. Butterflies, in their dozens, dancing around the marigolds. Marigolds on the rooftop? Yes, our garden was too shady for anything to grow, so the rooftop was a jungle of tomatoes, basil, lemon grass, rocket salad, three types of lettuce, bougainvillea, dahlias, and marigolds, which all thrived in the polluted Dhaka air. But I had never seen Bangla butterflies before. Most were tiny orange ones, with sparkly black eyes on their wings. Some rested on the blooms with their wings closed, looking like brittle leaves. A tawny one with frilly edges was four times the size of the others. Another resembled delicate porcelain: white on the upper part of the wings, and canary yellow on the lower part, with an orange crenellated border. A fine black reticulated pattern covered the whole wing.

I know little about butterflies, but I love their name, in every language. A butterfly in English is soft and yellow and floats gently. A papillon in French faffs about and is a bit like a bow-tie which is askew. A mariposa in Spanish is called Maria, and she poses on flowers for photos. You can’t take an Italian farfalla seriously. A kipepeo in Swahili flaps its wings noisily. But our Bangla butterflies in Dhaka were projapoti. They were regal. They did their own thing, flitting daintily from plant to plant, projapoti, projapoti. They were survivors. They ignored the workers peering from the mushrooming building sites, the megaphones, the horns, the traffic. Perhaps they had discovered something I never managed to find, in all my three and a half years in Dhaka.

I survived (or better, I am surviving) in Dhaka, Bangladesh

Prevention is better than cure: health in Dhaka

? We are joking of course, but there is something we would like to tell you. You might have noticed that Expatclic has no ads or paywall. For 17 years we have been working voluntarily to provide quality contents and support to expat women all over the world. However, keeping such a big website going has some costs, which we partially cover with team member’s fees and donations of those who appreciate us and wants our work to continue. If you could give even a tiny contribution to cover the rest, we would be immensely grateful ♥ You can support us with a small donation, even a small one. Thank you so very much.
9 August 2019 at 14:00
Bangladesh, Snapshots
abroad, asia for expats, Dhaka, expats
claudiaexpat
Subscribe
Login
0 Commenti
Inline Feedbacks
View all comments

I survived (or better, I am surviving) in Dhaka, Bangladesh

Prevention is better than cure: health in Dhaka