We propose you an article that Viviane (former team member of the Francophone section of Expatclic) had written on Music Day and on some musical instruments around the world. To put you in the right mood:-)

Music Day was launched for the first time in France by the French Minister for Culture and Arts, Jack Lang. It dates back to 1981. Since then 115 countries and 250 cities around the world introduced it in their festivities. It even became National Day in various African countries.

Why is Music Day celebrated on June 21st? According to our calendar, June 21st is the first summer day. A few days later, in the eve of St John’s Day (24 June), bonfires lighted at dusk celebrate the summer solstice, i.e., the longest day and the shortest night in the whole year. Though the tradition is still vivid in small villages, it unfortunately disappeared in bigger cities.

Music Day is therefore a sort of acknowledgement to our ancestors’ customs and habits, as well as a remembrance of traditional St John’s Day celebrations. Ages ago our ancestors would celebrate the sun and warm days. Christianity later introduced St John’s Day and its bonfires. People would play music, sing, and dance around communal bonfires. In Brittany (France), they would even invite the deads by placing empty benches around the bonfire. Do you know why? Just in case the deads would get bored to tears in their graves! They would thus seat, enjoy the warm night and festivities, and feel less alone in their eternity! In the eastern part of France, the Alsatians would also organize fake marriages between young women and men, while in the moutains people would try to drive off thunders, ligthning, and subsequent rains that could ruin harvest time.

With the passing years Music Day became international and now makes us dream of faraway places.

Music Day also gives us the opportunity to either discover or learn more about music instruments from every corner of the world.

Let’s introduce some of them. 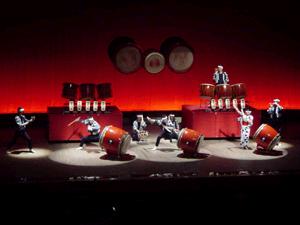 The Japanese word taiko refers to the various types of drums that can be found in Japan. Korean and Chinese people introduced them in Japan during the VIIth century. Traditionally this type of drum is a wooden barrel whose top is covered with either buck- or horseskin. Its drumsticks are named bachi. Odile who lives in Tokyo had the opportunity to attend a concert in the Sado Island (Japan). “The musicians use up a great deal of energy beating their drums”, stresses Odile. 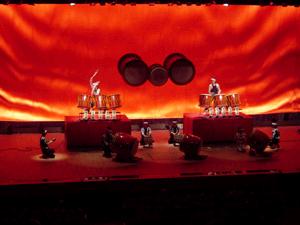 Another Japanese instrument is koto, a zither that was also introduced by Korean and Chinese people in the course of the VIth century. Formerly, it was named wagon, had only five strings, and was less than 1 meter in length. Nowadays it has at least 13 strings (actually, the number of strings may reach up to 30 strings, even 50 strings) made of silk, and is usually 1 meter 60 to 2 meters long. Its sound box is made of Paulownia wood. Each string has its own bridge placed along the sound box, thus providing the string tone. 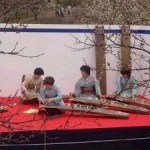 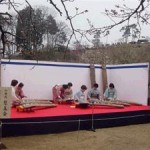 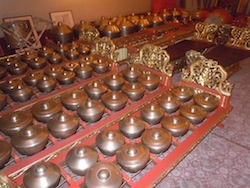 The Indonesian word gamelan comes from its parent word gamel which means ‘mallet’.
Gamelan corresponds to a traditional orchestra in Indonesia. It consists of various percussion instruments, including gongs, metallophones, drums, bowed and plucked stringed-instruments, flutes, etc. They are termed kenong , ketuk , bonang , kedang , saron , rebab , etc. If you click on the previous link, you will be able to listen to either Balinese or Javanese gamelan, as these orchestra are mainly found in Java Islands and Bali. They would have been introduced in both places during the course of the VIIIth and IXth centuries. Chorus and soloists accompany the instruments. A chorus may be composed of either women ( pesinden ) or men ( gerondan ).

Pelog , a seven-notes rhythm with irregular intervals and female tone, is related to human and social relationships, as well as to melancholy. 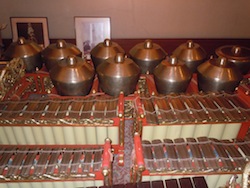 Fakroum is a music instrument with strings that may be either plucked or struck. Its name means ‘turtle shell’. Its sound box is indeed made of a turtle shell which gives it its shape. Communities living in Mali and Niger who had to settle in North Africa due to slavery used this instrument which is supposed to have magical powers through sacred songs and trance-inducing dances. It belongs to Stambali music. In Tunisia the Stambali orchestra is composed of three instruments, namely gombri (a sort of lute), chkacheks (a snake rattle) and tbal (a drum).

Tortoise rattle (kanyahte’ka’nowa) is a close instrument which is used by the North-American Indian natives. It is also supposed to have magical powers and is played during Iroquoian celebrations, particularly in the Brandford county.

How can you play music with strange spoons usually made of maple wood? Well, just to try you could hold the spoon handle, the curved parts should beat at the same time the palm of your hand and your thigh. A professional player would just have the spoons sliding along his fingers and beating only the palm of his hand. The sound is similar to that of Spanish castanets in Flamenco dance. Quebec’s wooden spoons are usually used in Quebec’s Sugar Houses and during celebrations such as the Maple Syrup Festival.

Did you know that a saw may not only be used to saw up trees and branches into logs? Well, musical saw is a traditional Quebec’s folk instrument. Playing musical saw is quite hard: you have to place the wooden handle between your feet and bend the blade into an “S” curve with one of your hands, the other one handling a violin bow and rubbing the serrated edge of the saw. Although its origin is unknown, specialists think that this unusal instrument would have been introduced by French woodcutters spending days working in the Canadian forests. They would play it during the evenings. Henry Sauguet and other Canadian artists reintroduced it in Quebec’s folk music.

Yabaraw is another Malian percussion instrument that belongs to rattle instruments. It is a sort of gourd with a long neck allowing to handle it. It is wrapped in nets of wooden beads or stone fruits. The music player grabs the handle and the bottom of the cotton threads forming the nets. Beads (or stone fruits) and the gourd then knock together, producing the sound that progressively amplifies. They were introduced by Kore’Duga, an equivalent of our buffoons who made people laugh, and are mainly used in ceremonial plays. According to Kore’Duga, yabaraw would be a sort of ‘gourd for humanism’.

The Tahitian word arearea’a means ‘having fun within the family and friend circle’. Tahitians families gather to sing, dance, eat, and drink. Guitars, ukulele and accordions are often accompanied by a strange instrument named ‘touque’ or ‘toque’ ( pahu ) which is in fact a wooden container or barrel. It may also be simply a trashcan covered with a fishnet, the drumstick being… a broomstick!

Other instruments such as either nose flutes (vivo) , small flutes named ute , and horns (pu) also are used; however, the world-wide known instrument is ukelele which would have been introduced by Portuguese immigrants in 1879. Although smaller than true guitar, it either looks like guitar or is pineapple-shaped. To’ereis a small xylophone made of bamboo stick and beated with two drumsticks made of aito wood (iron wood). Faakete is a sort of drum whose top is tightly covered with sharkskin.

The most spectacular Polynesian dance is o’te’a whose name changes, becoming o’te’a tane (male dancers) and  o’te’a vahine (female dancers). Should men and women dance together, it is then named o’te’a amui. Usually people wear traditional costumes, including the more (a skirt made of fibrous plant), headdress, necklaces, and plumes.

Movements of male dancers are termed pa’o’ti which means ‘scissors’. They include up-and-down flexions of the knees, with the heels above the ground, and the arms outspread with clenched fists. Paoti to’ere rhythm is sustained, while that of Paoti pahu is slow. This dance requires resistance to fatigue, particularly thigh resistance.

Movements of female dancers looks like swaying walk and include alternate flexions of the knees, with the feet pressed against the ground in so far as possible, and the arms outspread. This dance is named ori Tahiti or tamure.

Himene are songs mixing traditional Polynesian rhythms and religious hymns. They are sung while praying during Christian mass, as well as during traditional celebrations or heiva i Tahiti which means… ‘party’.

Should you want to learn more about music around the world, you may browse these websites :

Just tune in, listen, and have fun!

Architectural elements in the world

Christmas in Norway: a serious business

? We are joking of course, but there is something we would like to tell you. You might have noticed that Expatclic has no ads or paywall. For 17 years we have been working voluntarily to provide quality contents and support to expat women all over the world. However, keeping such a big website going has some costs, which we partially cover with team member’s fees and donations of those who appreciate us and wants our work to continue. If you could give even a tiny contribution to cover the rest, we would be immensely grateful ♥ You can support us with a small donation, even a small one. Thank you so very much.
28 January 2005 at 5:36
France, Music, Traditions
claudiaexpat
Subscribe
Login
0 Commenti
Inline Feedbacks
View all comments

Architectural elements in the world

Christmas in Norway: a serious business