I have to admit, when I heard talk of a Tarantella School in Melbourne, I was sceptical. Being from Liguria, the Tarantella was, for me, totally foreign and I associated it with an image of Southern Italy that I wasn’t particularly connected to.  But at the suggestion of an overly enthusiastic friend, and given that I love dancing, I decided to give it a go. Rosa’s classes are a mix of dance, history, culture and a leap into an Italy that I know little about – but about which I want to know more. From Florence to Melbourne, passing through Calabria, Rosa has brought with her the rhythms of a ritualistic ancient dance. I am sure her story will carry you there. Thanks Rosa!

Customary question:  How long have you lived in Melbourne and how come you chose to relocate to the other side of the world?

I’ve been living in Melbourne for 14 years, since February 2003.  Like many others, I moved for love.  I met Renato, my husband, in the heart of Florence.  Renato is a visual artist, born in Melbourne of Italian origins.  At the time, he was in Italy to complete a comparative research on how the long held customs and beliefs of Italian immigrants in Australia had changed, if not disappeared, compared to those Italians still living in Italy.  May I say that ours was love at first sight, definitely facilitated by our many shared interests – particularly the subject of his research.  We travelled together in the south of Italy for the whole summer, gathering and documenting stories, beliefs and traditions which not only enriched our research, but also reinforced our connection with our own roots. 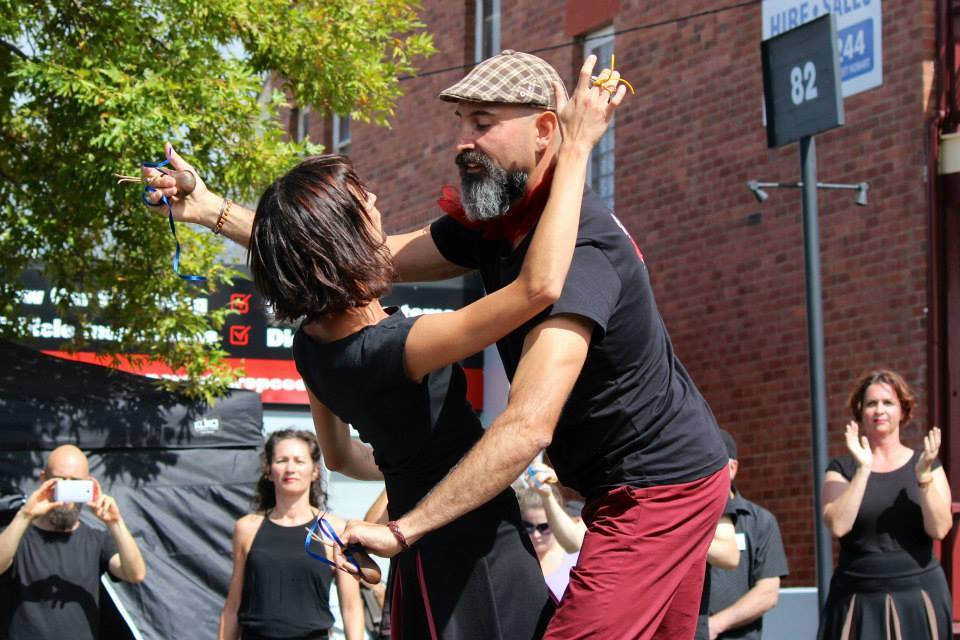 After just over a year of living together we got married in Australia.  We travelled at length, particularly in the north and centre, in an old Combi Volkswagen, eating up the huge distances of the desert, putting our relationship to the test! Sure enough at the end of this epic journey, we got married in a very simple ceremony in the bush outside of Melbourne.

Before deciding to permanently relocate to Australia, we had another go at living in Italy.  We lived with my Nonno in Calabria for a year, in a beautiful town called Verbicaro, in the middle of the Pollino National Park, and then again in Florence.

Making the decision to relocate was not easy, but at the time the work situation and economy in Australia was much more inviting than that in Italy and this definitely influenced our choice a lot!

What a rich and interesting story, Rosa.  I would like to know more about Renato’s research, but we are here to talk about Tarantella and I will have to wait for another opportunity for that one.

Let’s talk about you and the dance.  I imagine that your trip of “returning to your roots” brought you into close contact with the typical dances of Southern Italy, but tell us how you chose this path, have you always had a passion for dance?

In my home, in Florence, there was always music playing.  And every time that I returned to the south for long summer holidays or festivals there was always those who played, sang or danced.  Music has always been a constant presence in my life. And it has always been natural to move myself and for me to interpret – with movement – the songs, rhythms and melodies that have surrounded me.

I studied classical dance for 10 years, but I had to stop when I broke a leg in an accident on my Vespa, on one of the most beautiful promenades on the Arno in Florence.  As a young adult I was interested in folkloric dance, with a particular curiosity for the ritualistic and ceremonial aspects of the dance – this was stimulated by the arrival of new cultures in Italy, that brought with them tastes, smells, music and dances. 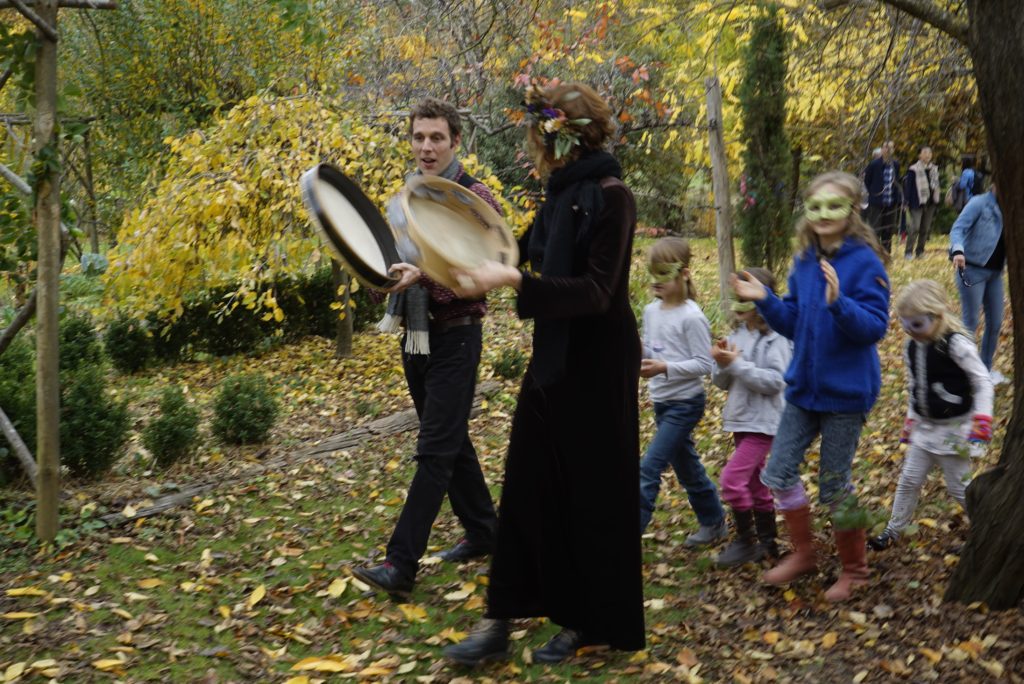 The trip in the south of Italy with Renato was indeed a return to the roots that coincided precisely at the same time.  But it wasn’t that which reconnected me to the traditional dances of Southern Italy….

The real reconnection happened years later, when I became a mother.  At the time I was studying Eastern dances, commonly referred to as “Belly Dancing”.  I was exploring the communicative value and power of them but also the spiritual aspect, the healing and how they are used as instruments for growth and enquiry.  During one trip in Italy, a bit longer than the others, we once again found ourselves at a concert of a group from Puglia, ironically in Florence.  It was one of the very first times we went out since having the baby.  I found myself dancing the whole night, tireless, driven and overwhelmed by the incessant and intoxicating rhythms of two tambourines played with such stamina and endurance, and by the stomping of the many other people around me, who were equally intoxicated by the music.

It was that very moment that reignited the memory of ancient dances and sounds in me, present in me from infancy and beyond time.

During that visit to Italy I went to search for possible opportunities to dance and play in both Calabria and Puglia, inside and outside my family circle. I met so many generous, hospitable and passionate people, proud of such abundance.

A beautiful journey into tradition, through dance.  Through your words one can feel all your passion and I feel compelled and drawn in by your enthusiasm!  Tell us about the Melbourne School of Tarantella.

Back in Australia I took to looking for traditional Southern Italian dance and music groups, but at the time no one was actually interested in it.  A famous Australian singer, with Italian and Burmese origins, helped me in the beginning – Kavisha Mazzella.  She had already done research on Italian songs and had founded the Italian women’s choir “La Voce Della Luna”. 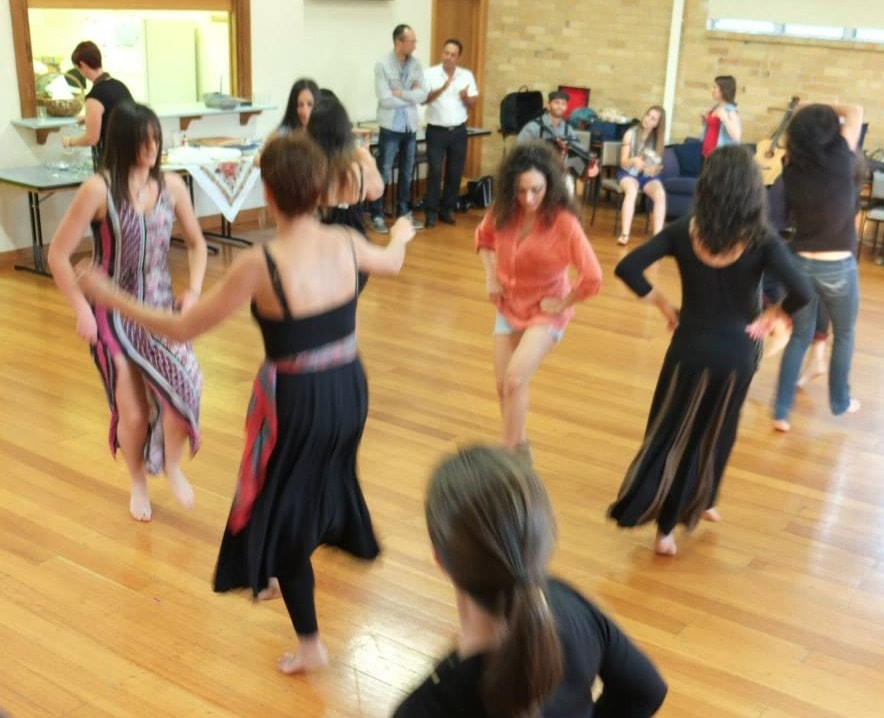 The absence of Italian folk dance here in Australia and the false stereotypes that saw these ancient, ritualistic and almost shamanic dances reduced to group dances, to dance when you are a bit drunk, pushed me to start the Melbourne School of Tarantella, the first dance school in Australia entirely dedicated to the traditional dances of Southern Italy.

In the last ten years, not only have I brushed up on my memory of the dances, but I have also studied with various teachers and old traditional singers in Italy, during my periodic visits there.  The tarantella has been for me a rediscovery of my roots, which I want to pass on to my children.

This dance has given me permission to reawaken in the Italian immigrants in Australia, an interest in their roots and also a curiosity and recognition of the dance as a language, an instrument of communication vital for the well being of firstly, the community as a whole, and then of the individual.

And I am one of those immigrants in whom you have reawakened that interest.  Despite not having southern roots, I felt drawn in by your enthusiasm and the music, but also by the history behind these dances.  To finish, I would like it if you could tell our readers something about the steps of the various dances: where they come from; what are the rites that might be hidden in the movements; pagan rites, ancient, rich in charm and mystery that reveal a part of the Italian culture that I didn’t know but that I am extremely happy to have discovered, and to continue to discover!

The tarantella has very ancient origins tied to pagan culture and beliefs in which they celebrated nature’s power and her cycles.  The Tarantella emerged as a rite or a way to express primeval birth, the myth of creation, the encounter between the feminine principle and the masculine, which is life. 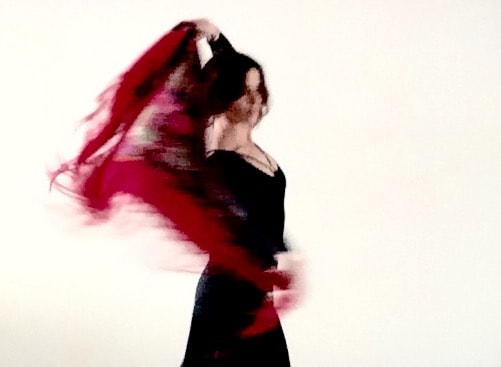 The presence of powerful and clear opposing and complementary symbols that evoke the feminine and masculine archetypes – of death and life, of positive and negative – in the various styles of the Tarantella, are testimonies of it’s past; of ceremonial acts belonging to the fertility rites in which one would celebrate the beginning and the end, the cycle of nature.

The dances take place in a circle: the dancers go around eachother, describing, with their steps, spirals and labyrinths inside which they lose themselves and find themselves again, in order to die and to be reborn.  Some of the gestures refer to agricultural work, manual work:  to hoe, to harvest and gather.

Other steps are clearly inspired by the courtship performances of certain birds: the man dances with wide open arms and flapping “wings” around the woman who holds her hands at the hips or clasped behind the back.

In the Tammorriata Napoletana performance there is a very clear analogy with the movement of the planets, of the sun, the moon, the waves of the sea.

The dancers meet each other, dancing very closely, almost touching, the arms and the hands in continuous movement, describing half moons and ears of corn.  Then they move apart, frenetically, one away from the other and restart the dance to come back together again.  This movement is repetitive, exactly like the movements of the universe, of the seasons, of life.

The dances themselves are repeated cyclically during the harvest, the full moon, initially during the ceremonies to the gods, and more recently, to the Saints and Madonnas. 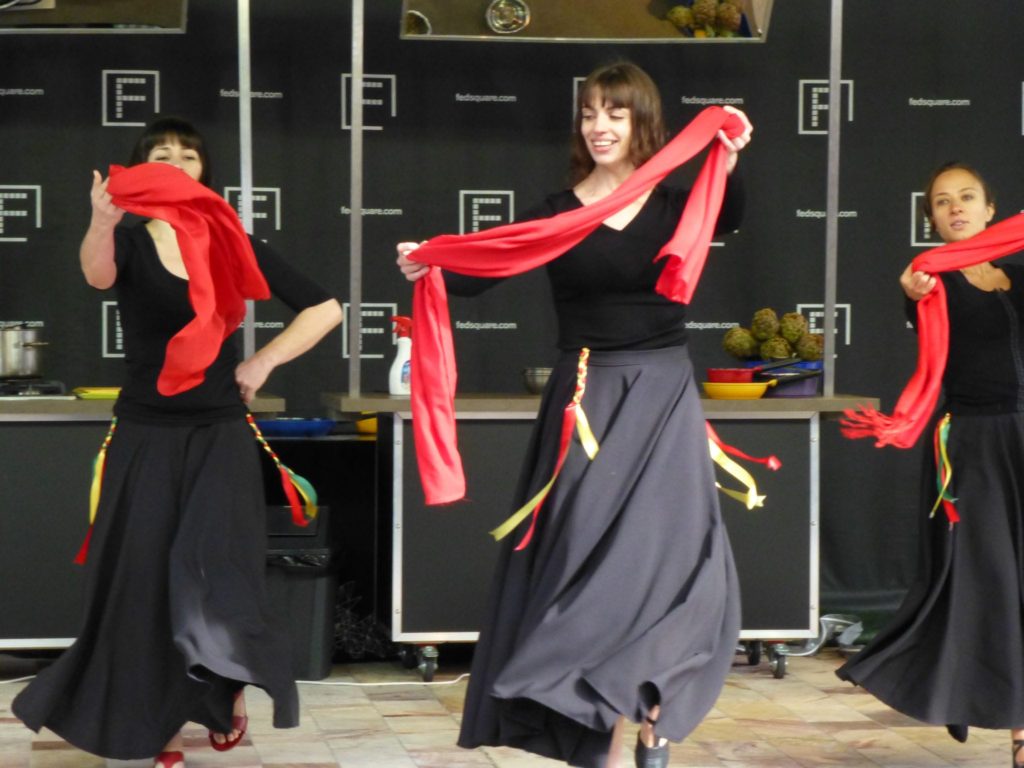 That’s how the Tarantella came to us as a dance that takes place at weddings, baptisms:  to all that which remains celebratory in a culture that is becoming more and more detached and disconnected from nature, in an attempt to maintain its purpose of ritual and prayer.

Thanks Rosa, for your detailed and heartfelt description of the dance and for having lead us on a captivating journey into this Italian tradition.

Becoming a DJ in Melbourne, fulfilling a dream

? We are joking of course, but there is something we would like to tell you. You might have noticed that Expatclic has no ads or paywall. For 17 years we have been working voluntarily to provide quality contents and support to expat women all over the world. However, keeping such a big website going has some costs, which we partially cover with team member’s fees and donations of those who appreciate us and wants our work to continue. If you could give even a tiny contribution to cover the rest, we would be immensely grateful ♥ You can support us with a small donation, even a small one. Thank you so very much.
20 June 2019 at 15:55
Australia, Work Abroad
abroad, art, career abroad, expats, life abroad
Barbara Amalberti

Becoming a DJ in Melbourne, fulfilling a dream