The healthcare system in the United States

We thank Isabelle, Doctor of Pharmacy, who lives in the United States (Kansas) for this absolutely useful article on the healthcare system of her hosting country. Thank you Isabelle!

Let’s start by saying that costs in the medical field are a real shock when you arrive in the United States. The cost of medical consultations and medicines are really disproportionate in relation to France. They are easily ten times higher.

For a minor problem, and to follow the children, you must make an appointment with a family doctor. The visit takes place as follows, in two stages:
• First, a nurse comes to take your pulse, blood pressure, and temperature, and then records weight and height. She will ask a couple of things, without giving any indication.
• Then comes the doctor, and after consulting the data and asking some questions, he starts the physical examination. After the diagnosis (or without one), he can give you a prescription. You’ll have to give the name of the pharmacy where you want to go and collect the medicines: the prescription is sent directly to the pharmacy, and you will leave without one. You may also have some further tests prescribed. Sometimes these can be done in the same place, or at the hospital. The doctor may also decide to send you to a specialist.

For this kind of visit the cost is between 200 and 300 dollars, that will be covered depending on your insurance (see below).

There are small centers that deal with urgent cases as well as requests for sport certificate. They are interesting when you’ve just arrived and you don’t have your doctor yet.

Emergencies are accessible and useful for dealing with really urgent cases but can also come in handy during holidays. 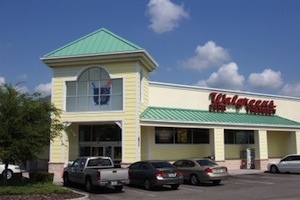 Pharmacies are everywhere in the United States. There are large chains that look mainly as supermarkets and where you find more or less everything. Their names are: CVS, Rite Aids, Walgreens, etc.. In addition, most supermarket chains like Safeway, Target, Hyvee, Walmart etc. have their own pharmacy.

The prescribed medications must be picked up at a desk that is usually found in the back of the store. They are prepared and delivered after receiving the prescription by e-mail. Only the strict essential is delivered.
On the shelves you will find a lot of medicines that you can buy without a prescription. Apparently wide, the choice is relatively small. The main therapeutic categories are:

*painkillers / antipyretics: paracetamol (under the name of acetaminophen), aspirin and ibuprofen.
*laxatives
anti-diarrheal
*medicines against colds, spray and tablets.
*antiacids
*antisthaminics: ointments and tablets
*bandages, disinfectants and ointments
*eye drops
*medicines against cystitis and vaginal fungal infections
*a shelf for children’s products, unless drugs are divided differently, as appropriate,
*vitamins, some herbs
*occasionally a bit of homeopathy.

Note that while the prescription-free medicines have reasonable prices, those prescribed are exorbitant ($ 160 for a cream that is around 5 euros in France). But the amount that remains to be paid depends very much on the insurance coverage you have. In the corridors and over the counter pharmacists are not really available to dispense advice.

To find homeopathic medicines you must go to organic supermarkets, such as Whole Foods: there you find the whole range of Boiron, and also tubes of granules. There is also a wide selection of herbs. It ‘a good alternative to traditional medicine even if the offer is rather poor.

In addition to the normal pharmacies, there are small independent pharmacies, a bit as in France, and the pharmacies said supplementary, like Whole Foods, that cover the whole range of medicines called alternative (eg Pharmaca).

Despite the health insurance reform, known as Obamacare, social protection has not really developed for those who are already covered by a private medical insurance. To understand your medical insurance you need to understand two terms:
• The deductible: the amount at which they begin to pay you back. For example: you have a deductible of $ 3000, you will begin to be reimbursed when you have spent $ 2999. The deductible generally covers a period of one year and is not necessarily required by all insurance companies.
• The co-pay, with some insurances the co-pay is the part that must be covered by the patient. For example, instead of paying the full cost of a visit you only pay $ 20 of co-pay and the rest is sent to the insurance that will pay the doctor directly.

There are various types of insurance: in addition to the purely medical ones, there are also insurances for dental expenses and ophthalmology insurances.
Each insurance has its own terms of repayment. The doctor never knows on which procedure his reimbursement is based on and it is not uncommon to receive a high bill for costs that were not to be covered by you. In short, this insurance system is a real puzzle, terribly unjust and unsettling for us French, accustomed to our rigorous system of Social Security.

Finally, it is important to know two things:
• the insurance coverage ends when you leave your company
• everything is negotiable: for example, if you do not have an insurance, hospitals offer you a discount… you can also negotiate on the prices of prescribed medicines if your insurance does not cover them entirely, saying that you could get better prices in other pharmacies…

Small guide against insects in case of “hard relocation”

Plan Canicule 2010 – for expatriates in France

? We are joking of course, but there is something we would like to tell you. You might have noticed that Expatclic has no ads or paywall. For 17 years we have been working voluntarily to provide quality contents and support to expat women all over the world. However, keeping such a big website going has some costs, which we partially cover with team member’s fees and donations of those who appreciate us and wants our work to continue. If you could give even a tiny contribution to cover the rest, we would be immensely grateful ♥ You can support us with a small donation, even a small one. Thank you so very much.
8 December 2012 at 6:36
Health, United States
well-being
claudiaexpat
Subscribe
Login
0 Commenti
Inline Feedbacks
View all comments

Small guide against insects in case of “hard relocation”

Plan Canicule 2010 – for expatriates in France