Erika tells us the romantic love story of two musicians, an Italian man and a Colombian (expat)woman.

This is a tale of love and music. Of departures and homecomings. This is a modern tale that starts at the beginning of this century, when the characters are not yet aware that they would soon meet.

Francesco is Italian, from Turin, and at the age of 22 was the first violin at La Scala.

On the other side of the world Adriana was the first cellist to graduate from the Colombian Conservatory of Cali.

Neither had been raised in a family of artists, they had simply learnt to appreciate and love music from a young age and had cultivated this passion until it became a profession.

It is 2001 when Francesco departs from Milan and arrives in South America on behalf of the orchestra conducted by F. Belli, for a week of cultural and musical exchange with Colombia; Adriana speaks a little Italian and is asked to act as interpreter during the stay of the Italian group in Cali, a city located in the Southwest of the country. They meet, get to know and see each other, but it is only for a small number of days and so he goes, leaving behind only an e-mail address to entrust their friendship to. For one year and a half this will be their relationship: a few e-mails, some work contacts and nothing more. 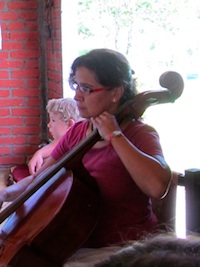 She finds a job in Bogota in Colombia’s national youth orchestra and moves to the capital to teach cello and solfeggio at the youth orchestra music school. A year later, as Francesco is on tour in Lima with his string quartet, he calls her and asks to meet her. He lands the next day and only at that moment do they realize that they haven’t told each other many things and so, sitting in an airport cafe they talk to each other and decide to spend a few days together; in Bogota, an then in Lima.

But the break ends, she returns to her job, he has to play in New York and their roads divide once again.

Time goes on, and both think, ponder, decide.

After a few months a new departure. Adriana takes the big decision to move, says her goodbyes to her family and friends and joins Francesco in Italy, where she enrolls in DAMS; she studies, graduates; they are happily living together and she stays. Years pass and to cheer their lives come two children and two weddings. They marry in Italy and later in Colombia.

Today their lives are in Milan, in the Niguarda area, but they regularly try to find the time for a vacation, a family reunion in Colombia to see mum, dad and many relatives who wait for them eagerly and give them a hearty welcome each time they return.

Francesco plays, both at La Scala and as a solo artist.

Adriana teaches music to children: she created a laboratory to initiate to music small children between the ages of three and six and works together with local kindergartens.

They will, perhaps, leave again. To follow their work, their music. But always, together.

? We are joking of course, but there is something we would like to tell you. You might have noticed that Expatclic has no ads or paywall. For 17 years we have been working voluntarily to provide quality contents and support to expat women all over the world. However, keeping such a big website going has some costs, which we partially cover with team member’s fees and donations of those who appreciate us and wants our work to continue. If you could give even a tiny contribution to cover the rest, we would be immensely grateful ♥ You can support us with a small donation, even a small one. Thank you so very much.
22 January 2013 at 18:53
Couples, Testimonials, Work Abroad
accompanying partner, couples abroad, expat couple, expats, Experience
Anna Cereti
Subscribe
Login
0 Commenti
Inline Feedbacks
View all comments