We so warmly thank Judy, from the US, and Liz, from Honduras, for this absolutely delightful interview about being a mixed couple in the US culture.

Dear Judy, Liz, please share a bit of your story as a bicultural couple: where have you met, why did you decide to settle down in the States, anything you want to tell us about how you came to make a family

We met in Honduras, where we were both working as teachers. Liz is a Honduran native, and Judy lived in Honduras for 17 years. We would have loved to stay there, but things were getting more and more dangerous. Even though you can take precautions and live relatively safely, we didn’t like the fact that our children (at that time Liz’s biological children were all school age still), had virtually no freedom or independence. They couldn’t safely go outside and play, they couldn’t safely ride their bikes, they couldn’t safely get on a city bus to go see a friend. All of these things that young people take for granted in many other countries, are impossible in Honduras these days. We wanted them to be able to have more freedom, and more independence, and learn to navigate the world without always having to have a parent there to transport them and keep an eye on them to make sure they’re safe. 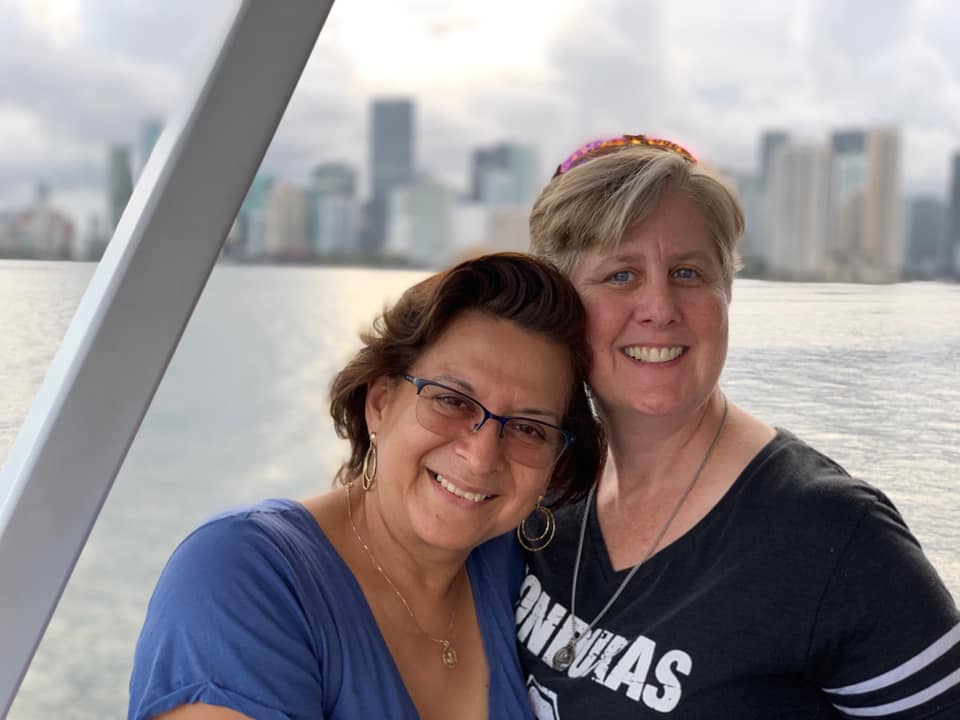 Another big factor was how hard it is to live as an openly lesbian couple in a country like Honduras,where LGBT rights and protections are really not a thing, at least not yet. Even though progress is being made there, and members of the Honduran LGBT community are fighting every day (sometimes with their lives) to achieve equality, a lot remains to be done. If we had no children, we would probably have stayed n Honduras; but we didn’t want the children to be forced into a position where they had to defend us against an extremely prejudiced society, or defend themselves against the bullying they would inevitably face.

Moving to the United States was an obvious choice, because that’s where Judy is from. That was 12 years ago. If we were making the same decision today, given the current government and rise in blatant bigotry here, we may have decided to go to a different country.

Liz, this is for you: what where the hard points you encountered when you first moved to the States to be with Judy? Were you already familiar with the US culture or had you just experienced it through Judy? How was the adaptation process? 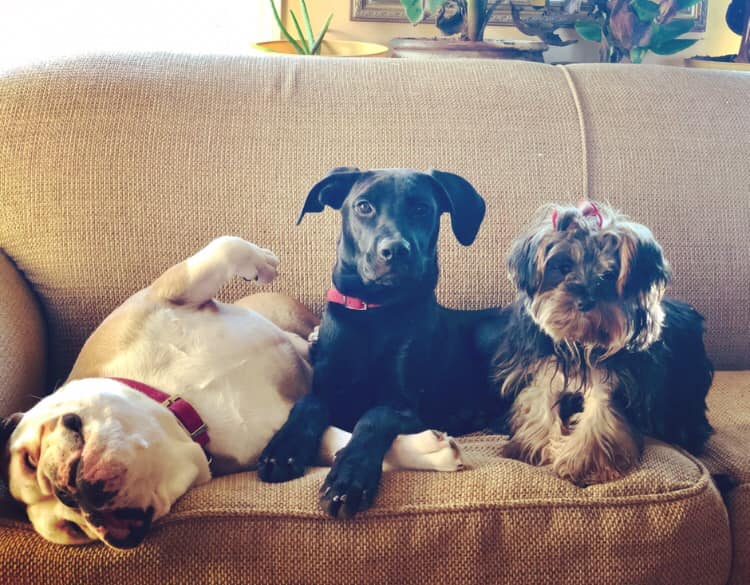 Liz was already quite familiar with U.S. culture because she had lived in Washington D.C. for a couple of years. But still, it took some time getting used to driving here, and dealing with everyday things like getting cable TV set up or handling a car repair. Now that is all second nature, but it did take some time to become comfortable.

At first Judy did all those things, and also most of the driving, but now we’re pretty balanced at those kinds of tasks. Even though Liz is now a U.S. citizen, there are still times when it is extremely frustrating to be seen as “a foreigner”. We live in a pretty progressive part of the country, but there are still a lot of daily micro-aggressions. For example, Liz was recently out walking our three dogs in our neighborhood, and a man asked her if she was the dog walker. Another time, Liz and our youngest son were ordering food in a restaurant, and the server asked if she was our son’s maid. Things like that continue to happen every so often and that’s the hardest part about living in the United States. On the bright side, though, our kids see it happen, and it makes them more aware of that kind of thing, and less likely to treat other people that way. Overall, though, the whole family adapted quite well to life in the United States. The kids felt welcome in the local schools, made friends easily, got involved in sports and other activities.

This month at Expatclic’s, we are exploring the joys and pains of being a bicultural couple: what would you say these are?

We are pretty lucky, because honestly there is much more joy than pain for us in our bi-cultural marriage. This is probably because we both speak each other’s native language fluently, Judy was very familiar with Honduran culture after living there for so long, and Liz had lived in the United States for a few years. Understanding each other’s home culture and language makes things a lot easier. There are still some differences that are hard to compromise on, like Christmas, for example. Judy grew up with Christmas being a quiet, small, family celebration held on the morning of December 25th, while Liz grew up celebrating la navidad on the night of December 24th, with big parties, loud music and dancing into the wee hours of morning. By now, we have each learned to enjoy each other’s favorite versions of Christmas, but at first it did take some getting used to. 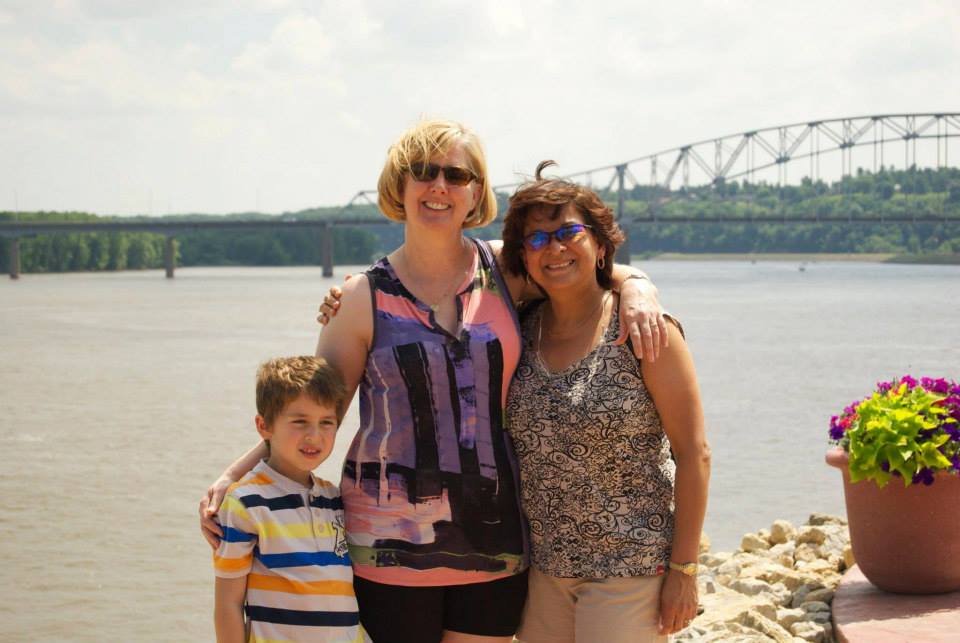 We also still get stared at a lot. When, for example, we’re out together at a restaurant, one of us obviously Latina and the other obviously not Latina, speaking a weird mix of English and Spanish, people can sometimes have a hard time figuring us out. Especially if we have one or more of our children with us. Another thing that happens a lot that drives Judy crazy is when we are standing in line together, people never think we’re together, so they cut right between the two of us if they’re trying to get through the line, or if someone is forming the line into groups, they never think to include Judy in the same group as Liz.

You have a son, born and raised in the States: what would you say is the reference culture for him (if he has one)? How do you balance the fact that one parent is a gringa 🙂 and the other a catracha? Since he was born, Judy always spoke to him exclusively in English, and Liz exclusively in Spanish. When he was learning to talk, he mistakenly said “bapo” for apple. So one of his first simple sentences was “más bapo” when he wanted more apple. Of course, he favors English, since that’s what he hears all around him, on TV, on the radio, in music. But we sent him to a bilingual school, and that really helped him also use his Spanish daily. By now all of our children are completely bilingual, but we still speak mostly Spanish at home. We are very proud that all of the kids feel that speaking Spanish is a thing of pride for them. When we first moved here and our youngest daughter was in 7th grade, one of her teachers told her that she shouldn’t speak Spanish at home because she wasn’t learning English fast enough (that teacher was an idiot.) But, on the contrary, we have encouraged all of our kids to be fluent in both languages, without favoring one over the other, and especially to never feel like one language was superior or inferior to the other. All of the kids frequently chose (and continue to choose) Honduras as their topic for different school assignments, even through university. Even though they fit well into the community here, we are always proud to see them view Honduras with pride, and see them educate others about Honduras. Even though we don’t live there anymore, we keep Honduran traditions alive in our home here, and we keep up with the news in Honduras. By now, they are good at recognizing the good and the bad in both countries.

Have you found a balance smoothly over daily things like what language to speak at home, what to cook (hamburger or anafre?), etc. ?

We pretty much do whatever feels right at any given time. We still mostly speak Spanish at home, but it’s become more and more speckled with English phrases, and we weave in and out of both languages depending on whatever happens to come out naturally. As far as cooking, we enjoy a little of everything. Our summer cookouts are usually Honduran carne asada with beans, tortillas, and the usual Honduran specialties, but the family also enjoys U.S.-style breakfasts and the traditional Wisconsin bratwurst sausage. On holidays we combine both cultures and end up serving a big dinner with things like roast turkey and cranberry sauce alongside homemade Honduran tamales. Everyone gets really excited when we have visitors from Honduras who bring us treats that we can’t get here, like the traditional sweet breads, Honduran coffee and authentic platano chips.

What would you say is the biggest gift of being in a bicultural couple?

The biggest gift has been seeing our children grow up and be comfortable in both cultures. Not only does this give them two rich cultural backgrounds to draw from in their lives, it also makes them more empathetic toward (and curious to discover) other cultures that are not their own.

? We are joking of course, but there is something we would like to tell you. You might have noticed that Expatclic has no ads or paywall. For 17 years we have been working voluntarily to provide quality contents and support to expat women all over the world. However, keeping such a big website going has some costs, which we partially cover with team member’s fees and donations of those who appreciate us and wants our work to continue. If you could give even a tiny contribution to cover the rest, we would be immensely grateful ♥ You can support us with a small donation, even a small one. Thank you so very much.
24 October 2019 at 17:24
Couples, United States
couples abroad, life abroad, mixed couples
claudiaexpat
Subscribe
Login
0 Commenti
Inline Feedbacks
View all comments