From Shanghai to Tokyo

Malena is a great friend of Expatclic. In the past she was on the site’s Spanish-speaking team. After spending a few years in Shanghai, she has now moved to Tokyo. In this insightful article, she shares her feelings about the change. Thanks, Male!

From Shanghai to Tokyo…my impressions…

In China, everything is ‘in your face’ 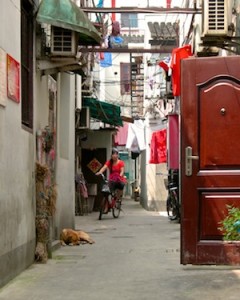 The atmosphere is vibrant, joyful, colourful, bustling. The streets are for walking, and for living life to the full. It is there that people do business, eat, play mah-jong, and hang out their laundry, including their underwear. The washing is draped on purpose-made lines, trees, cables, billboards…simply everywhere.

And the streets are where tradespeople work: here you will find tailors, cobblers, bicycle workshops, and locksmiths.

The doors of houses are left open, and generally, the people living there are happy for you to peep in and even take photos. A friendly smile is all it takes to be granted permission.

The Chinese are extroverted, neighbourly, spontaneous, vocal, extravagant and uninhibited.

They make all sorts of noises when they sip their tea, when they eat, or after meals. This might be considered bad manners in many countries, but for them, it’s as natural as saying ‘good morning’, and absolutely essential to keep the digestive system in good order.

In Japan, everything has to be discovered

In the city of Tokyo, or at least in my neighbourhood, I am greeted by silence, reflection, introspection, sobriety, elegance, synthesis, refinement, subtlety, detail. Everything is small, on a human scale.

People are distant, reserved, reticent, and discreet: they don’t want to be in the way, they respect other people, their time, and their space. They are tidy. They strictly abide by the rules of co-existence.

Houses are built as solidly as it takes to stand up to earthquakes, and as minimalistically as it takes to be able to knock them down after two or three decades…whenever it might become necessary, with no regrets. 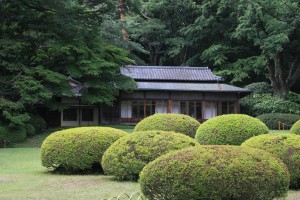 This is probably connected with seismic activity, religion, philosophy. They learnt thousands of years ago that everything moves, or will move. Resignation, or wisdom? Go with the flow…don’t resist. So the architecture is crisp, the few adornments are simple and neutral in colour (grey, beige, white). Sometimes I feel as though I’m living in a scale model.

The sounds of birds and insects caress our ears throughout the day, interrupted only by an occasional siren or car, which reminds us that we live in a city of 13.5 million people.

When I walk the streets of my neighbourhood, nature is ever-present. It can be found in touch of green between two stones, at the edge of a path, on a wall, a balcony, or in a narrow garden or an array of flowerpots. An elegant rose might flourish alongside a scruffy weed, which sprouted without so much as a by-your-leave, and just stayed.

The park in my neighbourhood is surrounded by a stone wall and three or four gates. It was born on a hill. If you enter by the small gate, you immediately forget that you are in a city. There’s a waterfall, and a small lake. You will see a couple of people fishing with rods. There’s luscious vegetation, some of it tamer than the rest, little stone and dirt paths, wooden steps. People walk about, have a snack, and live in complete harmony with the park, with its rhythm, with its sounds…

Tips for moving to London with your family

My first days in Geneva

? We are joking of course, but there is something we would like to tell you. You might have noticed that Expatclic has no ads or paywall. For 17 years we have been working voluntarily to provide quality contents and support to expat women all over the world. However, keeping such a big website going has some costs, which we partially cover with team member’s fees and donations of those who appreciate us and wants our work to continue. If you could give even a tiny contribution to cover the rest, we would be immensely grateful ♥ You can support us with a small donation, even a small one. Thank you so very much.
12 February 2015 at 1:51
China, Japan, Relocating
culture, moving, Relocation
claudiaexpat
Subscribe
Login
0 Commenti
Inline Feedbacks
View all comments

Tips for moving to London with your family