We thank Italian Beatrice for this beautiful article where she reflects on school in Hong Kong, her host city.

To face school in Hong Kong you’ll need great fortitude, a strong self-confidence and conviction in your opinions, a lot of patience and tolerance, and a proven ability to defuse and compromise. I am not talking about high school in Hong Kong, but of kindergarten! I had been warned by all of my friends and acquaintances living or having lived in Hong Kong but still, when my husband told me we would relocate here just at the moment when Francesca had to start kindergarten, I did not even think about it.

Two days after our arrival a mother, also a foreigner, whom I met at the park, told me: “Good luck with kindergarten! I arrived seven months ago and was fine, and now I am in the midst of a nervous breakdown caused by the school system… should we stay here until my son goes to high school, I’ll have to accept the fact that he’ll be constantly rejected”.

I did not heed her words: strong in my long-time experience as an expat, I thought my philosophy of “letting go of anything that others think and say” would also efficiently apply to my daughter, and in fact… here I am in Hong Kong, six months later, with 12 years of life in China and 2 in the Arab Emirates behind me, and in full nervous breakdown thanks to the school in Hong Kong!

Hong Kong is a bilingual place (at least in theory), Chinese-English, with a great culture and a long tradition. It hosts hundreds of thousands of expatriates, mostly of British origins and coming from countries that have British or American school systems.

Consequently, public school in Hong Kong is generally bilingual even if without a doubt Chinese (Cantonese or Mandarin) prevails over English. There is also a plethora of private “international” schools, whose teaching language is English, coupled with Chinese (a few hours in kindergarten, and increasing further on).

Public schools are very strict. The Yale professor Ms Chua has invented nothing new with her notorious book on “Tiger Mother”: in Asia all medium-upper class mothers (those that don’t have to worry about putting together lunch and dinner, to make myself clear) are almost always tiger mothers – maybe despite themselves – eager to have their children prized as “best ones” at school, in arts or at least in sports! The school adapts to the wish of parents to see their children quickly excel in the school programme, maybe anticipating the end of the school by some years. 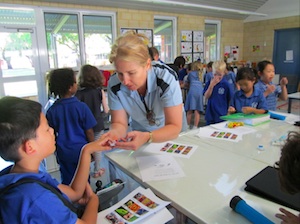 Actually this might be one of those cases when you don’t know whether the chicken or the egg came first: has school in Hong Kong complied with parents’ requests, or have parents gone out of their minds after hearing the school promises when they enrolled their children, or pressed by the abominable quantity of homework they receive (yes, I am still talking about kindergarten!)? Be as it may, parents complain if at three the alphabet has not been learnt yet. Teachers don’t hesitate to send children home with an 0 if the alphabet has not been memorized properly!

Private schools partly adapt. They certainly give more space to games and children’s creativity, but we are talking about 15/20 minutes in three hours of lessons! They can’t afford to be too liberal otherwise these children will face serious problems when they undergo – portfolio at hand – interviews to enter primary school.

My husband and I naively thought that such a school could be all right for our daughter: at home we, lax-hen Italians, would counterbalance the tiger-strictness of the school. Many things of the international school we had chosen made us laugh: every day Francesca would come home with an evaluation in her diary; every week with two booklets to read together, one in English and one in Chinese (and how do parents cope when they can’t read Chinese, or can read it but not speak it?), about which a comment was expected; every month a report, from which we discovered that our daughter at the beginning was not at all good in Chinese (we were not very surprised by that!), and once every three months a chilling questionnaire with lots of absurd questions. The one that shocked me the most was: “Complete the sentence: Mum and Dad love me because…”. I had naively always thought that mother love was natural and not motivated by anything else other than being a mother!

We had to think again: our daughter had excellent results and was moved to the next class (maybe because playing at home helped her develop skills that you rarely can hone sitting at your desk and slavishly repeating ABC). This stirred the most extreme competitive local instinct: a mother, annoyed by the passage of Francesca to a higher class, put a lot of pressure on in order to have her daughter moved as well, or have our daughter go back if hers could not go forward. The school director, showing us a lot of regret, decided to make our daughter go back because the other one could not be moved forward. I, showing much less regret, decided to take her out of school, not because I did not like the class where she would return (which had been ok all along!), but because my relationship with this school in Hong Kong had been damaged: I now saw it was too concerned with bringing out “exemplary students” and that it was subject to pressure by anxious mothers: where was the child’s well-being in all this? What level of priority did it have in the school? 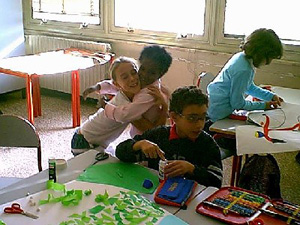 They forced me into the horrible position of being unable to tell my child the reason for so many changes of teachers and schoolmates. It made her unhappy (she wanted to stay in the new class with her best friend) and I could not even explain to her why she could not

It was not just the strictness and the school programmes that changed our minds. We realised that this school in Hong Kong would never suit us. Indeed we would never interfere in such a way in our daughter’s and other children’s life, even if they are very young, and we didn’t want our child to grow up comparing her success/failures and her joy/sadness to that of other children who might have had completely different life experiences, or simply be more skilled in a given field; we didn’t want that because while in the eyes of Asian parents the constant comparison and the search for superiority are the key for success, we, as European parents, are convinced that this opens the gate to unhappiness and perpetual dissatisfaction.

Francesca is now happily attending an alternative kindergarten inspired by Waldorf (whose philosophy is that children must not read nor write until they are 7 – but don’t worry, we are ready to counterbalance!); she is in a mixed class, with children of different ages, they have rabbits, fish, turtles and frogs, a playing ground with sand and a vegetable garden.

We know that without the notorious portfolio (the sum of teachers’ evaluations, homework exercises and school tests of the first three years of kindergarten) she will hardly be accepted in a leading primary school (or any other school in this country) unless we ask some important friend to put in a word, or pretend we have just arrived from Italy with a big Italian portfolio (obviously created by mum and dad during summer!).

So OK: in three years we might be anywhere; in three years the school with rabbits might have opened a primary school following the demands of exhausted parents; the most important thing is that in year three Francesca still is a happy child who does not know the meaning of a 0 marked in red on a paper.

Nurseries, preschools and schools in Jerusalem

The American School of Khartoum for CSN

To school by boat on the Atitlan lake

? We are joking of course, but there is something we would like to tell you. You might have noticed that Expatclic has no ads or paywall. For 17 years we have been working voluntarily to provide quality contents and support to expat women all over the world. However, keeping such a big website going has some costs, which we partially cover with team member’s fees and donations of those who appreciate us and wants our work to continue. If you could give even a tiny contribution to cover the rest, we would be immensely grateful ♥ You can support us with a small donation, even a small one. Thank you so very much.
29 January 2013 at 18:41
Hong Khong, School
children, education
Anna Cereti
Subscribe
Login
0 Commenti
Inline Feedbacks
View all comments

Nurseries, preschools and schools in Jerusalem

The American School of Khartoum for CSN

To school by boat on the Atitlan lake