After spending twenty years in Japan, Australian Lyn Doole has returned home to Maslin Beach in South Australia to operate a small wellness facility incorporating techniques picked up in various parts of the globe where her travels and interests have led her. Most exciting of the treatments offered at the Zentai Day Spa is Samassati light therapy, a brief overview of which appears below.

Though light as medicine is currently big news, its use dates back thousands of years and has been known to different cultures all over the world. It was quite normal in Mexico, Central and South America before the coming of the Europeans to take persons ailing to the top of high mountains, or to purpose built pyramids, where they would lie to bathe in full spectrum sunlight to effect a cure.

Visitors with strong legs, lungs, and climbing capacity, can today visit one such healing pyramid outside Tepotzlan in Morelos, Mexico. Aeons ago in what is now Syria and Lebanon, therapeutic sunbathing was practised. The early Egyptians were similarly informed on the healing properties of light, making homeopathic tinctures by placing different coloured crystals into water and exposing them to the sun. Depending on the health need, patients in Ancient Greece could recuperate in rooms of different colours attached to the temples. It is claimed that the large jewels worn by Indian grandees were as much to concentrate different light frequencies on the body as to demonstrate wealth. Cults of sun-worshipping dating back through the millennia have been documented in many areas and still today attract many followers.

Light therapy in the West

The knowledge of colour and light healing fell into abeyance in the West with rediscoveries happening only sporadically over the past century and a quarter. In the 1870s it was found that sunlight killed bacteria and ultra violet light came into use to reduce germs in operating theatres and barbers’ shops. By the middle of the twentieth century, British hospitals were experimenting with sunlamps to treat heart and circulatory conditions. In the US, starting in the nineteen thirties, ophthalmologist Dr. Harry Riley Spitler began using light of differing frequencies to treat a range of ailments. Fifty years later after a connection was made between lack of light and the “cabin fever” depressed winter states of many people living in high northern latitudes, protocols using light to relieve symptoms of seasonal affective disorder (SAD) were developed. Around this time, dermatologists experimenting with UVB light frequencies began to enjoy success in treating patients suffering from psoriasis and herpes. Now as the twenty-first century unfolds, practitioners both allopathic and alternative, are using light and colour to alleviate and to cure many disorders. 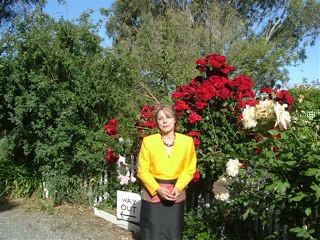 Lyn, author of the article

What results can be expected from the use of the seven spectral colours?

Red stimulates, it strengthens the adrenals and the kidneys, helps with skin diseases, scar tissue, circulatory issues, and non-infected wounds that are slow to heal. It is a colour one will apply in a range of chronic conditions.
Orange helps cramping muscles relax and also brings relief to asthma sufferers. It is useful in all cases of depression as well as being helpful in sclerosis and heart disease. Alternating orange with indigo works to bring purification and balance to the endocrine system.
Yellow, as well as giving support to the immune system, is clarifying thus is much used in detoxification and cleansing protocols.
Green being sedative and cooling can be employed to reduce localised swelling, cysts and tumours. Where pain is a function of an excess of energy, the application of green light often eliminates the discomfort.
Turquoise helps to regulate the lung-large intestine organ system. Besides being both cooling and pain relieving, indigo is strongly anti-bacterial, and lowers blood pressure as well. Physically violet sedates while at the same time it stimulates emotionally. Of course these are but a few of the results from the application of coloured light to the body, and only a handful of the many, many colours and colour combinations at the practitioner’s disposal.

How and why is light so effective?

Good questions, but ones elusive of answers. Looked at from an Ayurvedic standpoint, one may say that there is a strong relationship between the chakras, nadis and light frequencies:

Indeed, giving the associated light to a particular chakra that is under-, over-, or not performing is always effective in restoring proper function. But why? Traditional Chinese Medicine (TCM) views a given illness situation as being possible blockages to, or lack of balance in, energy flows. The many-frequencied character of light enables blockages to be cleared and balanced energy flow to be restored.

But how? An interpretation from quantum physics sees matter as frozen or compressed light, which itself can be seen as a wave or a particle, though not simultaneously. Should we seek our explanation here? Research by Fritz Albert Popp has demonstrated that the language by which individual cells communicate, DNA-speak, is via photons, light packages. The Samassati approach sees not only that every living thing has a light matrix blueprint, but that everything in the universe is connected by light. A key feature of Samassarti treatment is indeed the connection between therapist and client and the combined intention of both to recover balance in all systems.

Does this bring us closer to an understanding? Personally I am at the “blind faith” level. I have no idea how or why the light works, but having seen results with clients, I KNOW that work it does.

The light goes where it is needed and side effects are virtually unknown. Those of us tinkering with our light torches, on and off the body, at a multitude of acupuncture points, are constantly thrilled by positive outcomes in a multitude of conditions.

I have recently been working with a man in his fifties who for the past decade has been incapacitated by Multiple Sclerosis. When we started our weekly treatments five months ago, he was perpetually exhausted yet could get no rest because of insomnia. Migraine-like headaches plagued him, and stress would cause blindness of hours to days in his left eye. Often he lost all feeling in his legs, the left becoming for a time, seemingly paralysed. Hay fever, allergies, intestinal upsets, massive temperature fluctuations, balance issues, handfuls of pills, were part and parcel of daily life for him. He used a wheelchair around the house, and on the odd occasions he could venture out, it was with a motorized cart. All of this is almost completely past tense, and last week he walked about a shopping mall, exulting as he did so in the restored ability to be “normal”. He has brought his body and life back, supported by light.

My client’s recovery and the joy and satisfaction we both derive from it brings us a new nuance to enlightenment.

A medication kit for expats, what it should contain

Health, to stay or go home?

? We are joking of course, but there is something we would like to tell you. You might have noticed that Expatclic has no ads or paywall. For 17 years we have been working voluntarily to provide quality contents and support to expat women all over the world. However, keeping such a big website going has some costs, which we partially cover with team member’s fees and donations of those who appreciate us and wants our work to continue. If you could give even a tiny contribution to cover the rest, we would be immensely grateful ♥ You can support us with a small donation, even a small one. Thank you so very much.
4 December 2006 at 11:25
Australia, Health
well-being
claudiaexpat
Subscribe
Login
0 Commenti
Inline Feedbacks
View all comments

A medication kit for expats, what it should contain

Health, to stay or go home?