Claudiaexpat introduces us to Paul, an English gentleman who follows his partner around the world.

Paul is not the typical expat man trailing spouse, if such a concept exists. First of all, he is eighty years old, which you would never guess if he did not tell you, and before listening to the immense experience he gained in his amazingly interesting life. Second, contrary to all expat accompanying men I have met, Paul joined a women’s welcome association in Jerusalem, and did not disappear after the second meeting. He insisted on being part of it, stressed out that the group also contained a man, when mails circulated starting with “Dear ladies”, and was not discouraged in participating to potlucks where the only other male presence apart from him was the home cat.

I was very surprised by his attitude: in my 24 years abroad, and after attending all sorts of expat women’s group all over the world, I was sure the incompatibility between expat men and this kind of groups was final.

My personal experience showed me (so far) that it is much easier for an accompanying man to relate to expat women singularly, rather than feeling that sense of belonging and sharing which is necessary to be part of a group.

I never met an accompanying man that took part in one of our women’s groups’ meetings and came back enthusiastically to participate in our activities. It might be a matter of age – when you have gone through all Paul has experienced, you are probably done with shyness and reserve, and you live life in a more casual and free way.

I saw Paul a couple of times at meetings, and at one lunch I found myself sitting beside him. I was intrigued by this mature man who seemed to have been all over the globe, and was not stingy in sharing his past.

I asked Paul if I could meet him to talk in depth about his experience as accompanying man, and he generously accepted. We met at his place, and over coffee Paul told me more about himself, his present life in Jerusalem with his partner, who works for a humanitarian organization, and his past experience in Israel, from 1963 to 1967.

“It was a completely different country then”, Paul told me. And stressed: “completely different. You cannot imagine the shock I had coming back today. The atmosphere has totally changed. Hatred and racism have replaced the enthusiasm of a country in the making, where a communal egalitarian attitude and a dream of a kibbutz style society pervaded all the spheres of  local communities. There were no divisions, then: Arabs and Jews lived together, talked to each other. It was a young, enthusiastic country with people who really believed in an egalitarian and rich future for everybody”.

Then, though, he saw things starting to change: “The compensation the German government decided to pay to every Jew who had gone through or had lost a family member during the Holocaust had all the best intentions, but produced evil fruits: money started pouring in, and people who had nothing, suddenly found themselves with a small fortune. This quickly changed the mentality in Israel: I saw the society shifting from a socialist model to a consumer society. The focus moved from collective to individual interest, and the whole atmosphere changed. At the same time another important event took place: Eichmann was captured in Argentina and brought to trial in Israel. Those days you still saw many people who bore the concentration camp number tattooed on the arm – they were the Holocaust survivors who had chosen to live in Israel. Their children had not directly gone through the Shoah, but experienced the trauma through their parents. When Eichmann was brought to Israel to be tried, and the whole horror of the Holocaust was revived, the younger generations were outraged and turned against their parents, accusing them of not having done enough to fight against the evil plan. This brought a further dark mood on the country, with young generation against the older generation”. 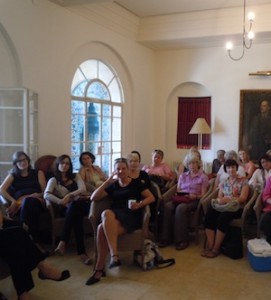 A meeting of the Jerusalem Expat Network

I was utterly fascinated by all this, and many more details that Paul shared from his previous period in Israel.

At that time, though, he was the one who took his family with him. He was accompanied by his late wife and a daughter, and another daughter was born in Israel. He was the Administration Manager for Barclays Bank, a career that has taken him all over the world.

Born in England, Paul had made his home in New Zealand. He lost two wives and a 45 years old daughter to a cancer.

When studying Spanish in Ecuador, he met his partner, the woman he is presently “following”. “I have been lucky because I have met Maite”, Paul went on. “I was in Ecuador to study Spanish, and she was preparing herself for a mission in Colombia. We met at the Spanish course”.

Paul followed Maite in Colombia, then they both decided to move to New Zealand, a country Paul deeply loves. While in New Zealand, Maite gained a PhD researching “Resilience and Coping of Refugees Resettled in an Alien Country”, which was later used by the government in formulating and changing policies on refugees.

She then went to Geneva to work for her organization, and Paul followed her. When the offer to move to Jerusalem came, he was ready. “Maite is an exceptionally clever woman, and that is exactly what I need”, he told me. “I need to be challenged by clever minds. That’s also the reason why I don’t get tired to participate in the Jerusalem Expat Network. This group is made up of very intelligent and extraordinarily interesting women. I don’t know whether it is pure luck, or the fact that living in such a challenging country makes people aware and more prone to analysis, but I find you all prepared and interesting. The “brain” level of the group is exceptionally high”.

I asked Paul how he spends his days and how he feels being in Jerusalem without a job that fills his time. “That’s no problem at all” he replied, “I am always busy – I play bridge during the week, participate in the JEN activities, read, visit around and take care of the household”.

And that’s not all: before I leave Paul tells me he is writing a novel. One that promises to be very, very interesting. With all he’s been through and known, it would be a real pity if Paul did not find a way to share his immense experience and, most of all, his energy and taste for life.

? We are joking of course, but there is something we would like to tell you. You might have noticed that Expatclic has no ads or paywall. For 17 years we have been working voluntarily to provide quality contents and support to expat women all over the world. However, keeping such a big website going has some costs, which we partially cover with team member’s fees and donations of those who appreciate us and wants our work to continue. If you could give even a tiny contribution to cover the rest, we would be immensely grateful ♥ You can support us with a small donation, even a small one. Thank you so very much.
12 September 2013 at 21:44
Expat Men, Israel
accompanying partner, expat couple
Anna Cereti
Subscribe
Login
0 Commenti
Inline Feedbacks
View all comments