The Japanese house and habits

We thank Momoko from Japan, who wrote this article in French, a language she only recently started to study. Silviaex translated the article. 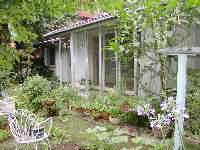 The Japanese house is composed of many rooms: the entrance, the living room, the sleeping rooms, the kitchen, the dining room, the bathroom and the toilets, etc…
The functions of the rooms are not very different from those of a European house.
And yet, due to the cultural differences in daily life, there are some peculiar dissimilarities. 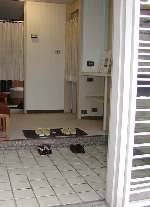 First of all, the habit of taking off one’s own shoes when entering the house.

It is for this reason that the floor of the Japanese house is 10 / 15 cm higher than the floor at the entrance. Thanks to this habit (of taking off one’s shoes), no dust can enter the house, and it thus stays clean and hygienic.

In the traditional Japanese house one notices a great wisdom towards daily life, acquired over some time. 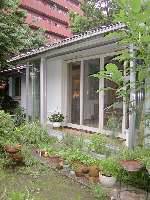 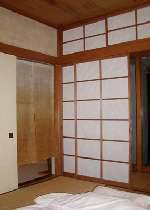 In the past, when there was no air-conditioning, houses were built in order to make it pleasant to live in, even in the summer heat and humid climate. That is why the window opened onto the garden and opposite the door, so as to allow the passage of fresh air through the house; a sort of natural air-conditioning.

In traditional rooms, the floor is often covered by «tatamis», a rectangular mat made of woven straw packed with rice straw. The size of a tatamis is normally 180cm width per 90cm length and it exists also in half-size. Tatamis are also used as a unit of measure as it helps to determine the size of the house.

The «shoji» – a sliding door that can also be used as a curtain for windows – is a panel composed of a wooden grill that, with its vertical and horizontal lines, creates smaller squared panels covered with paper. This prevents sunlight from entering directly into the room and thanks to the paper the daylight comes in more softly and indirectly.
The result is a calm, quiet and traditional atmosphere. 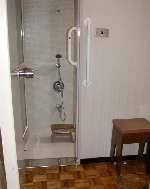 Taking a bath is another important habit for the Japanese. The bathroom has different characteristics from a European one and bathing practices are quite different.

Let me explain how to take a Japanese bath. For a start, the bathroom is the changing room. The floor of the bathroom is lower than the other rooms and its ground was especially made on cement when building the house.
The bathroom is small, square and closed by a folding door, often made of plastic. In the bathroom there is a tub, much deeper than its equivalent in Europe; a shower and a small place to wash. Before immersing oneself in the hot water, one has to wash. It is not good manners to wash oneself with the soap in the tub.

It is only after having washed and showered that one plunges in the bath tub up to the shoulder and relaxes in the hot water.

Once out, the tub is usually closed with a sort of cover that will keep the water warm for the next user, although nowadays there are electric tools to warm it up again.

Let’s talk now about another important element: the «futon» , i.e. the Japanese bed. 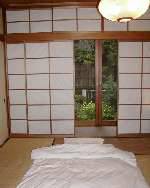 The «futon» is a mattress made from strong cotton fabric placed on the floor of the room, often on the «tatamis» . As Japanese rooms are small in surface, the «futon» is usually folded and stored in a closet during the day to afford space in the room. 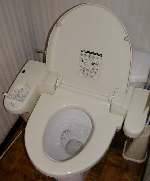 The toilet is also very different from its European equivalent, with a very peculiar form. Encased in the ground, it is a squat toilet which naturally requires a squat position from the user. Nowadays it is not the most common as it is not considered very comfortable, but it is still regularly found in the city’s public toilets.

Recently, new toilets with lots of commands became very popular in Japan. The form is the same as the European one except that some modern functions were added, such as the button to wash, to dry up and to flush.

As you can see, traditional Japanese life is really quite….down to earth!

In the past, tables and chairs were not as commonly used as they are today. The floor was where people ate and slept, eating on a low table and sleeping on the futon, right on the floor.

Nowadays there are actually many styles of living. Some people prefer European decorations, others the traditional Japanese one. It depends of course on individual taste and preference.

? We are joking of course, but there is something we would like to tell you. You might have noticed that Expatclic has no ads or paywall. For 17 years we have been working voluntarily to provide quality contents and support to expat women all over the world. However, keeping such a big website going has some costs, which we partially cover with team member’s fees and donations of those who appreciate us and wants our work to continue. If you could give even a tiny contribution to cover the rest, we would be immensely grateful ♥ You can support us with a small donation, even a small one. Thank you so very much.
3 February 2012 at 10:09
Japan, Travels
asia for expats, culture, different culture, Home
claudiaexpat
Subscribe
Login
1 Comment
Inline Feedbacks
View all comments