Home > Africa > The story of my grandmother, Olwen

In this heartfelt article, Miriam Fogarty shares the story of her grandmother who moved to Uganda from England in the mid ’50. A trip of a lifetime, slow and filled with adventure and new things, an experience that will touch all of us. Thank you Miriam, for this special gift.

I didn’t even like her that much, I mean, I loved her as any granddaughter loves her grandmother, but I didn’t get along with her very well. Probably because we didn’t speak the same language, and by that I don’t only mean the verbal one. This is the story of my grandmother, Olwen.

Her language of love was different from the one I spoke. On top of that she expected that I – as a child- could understand effortlessly what she told me in my father’s tongue. She had a lot to say and, indeed, she did, but I didn’t listen to her.

What she told every night at the dinner table was for us grandchildren the same old story and t we had to listen to it every time that the grandparents came from England to stay with us for a fortnight. 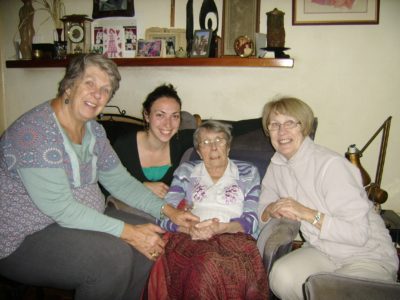 If only I had known that hers was a special story, one that my classmates would never hear!

Born in 1920, Olwen was the first of six siblings. She was a dark haired, blue-eyed, short lady with a beautiful shy smile. She got married to Frank, around her 23rd birthday and had to leave her employment as a civil servant since during the war women in the UK were not allowed to have a job if married. As a housewife she had a lot of work anyway, for her first child was born within their first year of marriage.

Ten years and three kids later, she and her husband started feeling uncomfortable in their comfort zone, so they decided it was time to branch out. Frank applied for a job which would  become the adventure of their life: a few weeks later the six of them were on a ship heading towards the east coast of Africa, knowing that they could not return for at least two years. 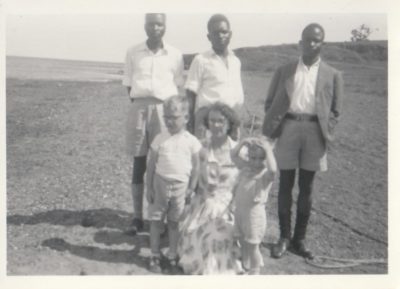 During the journey she saw things she only had read of: the Mediterranean and the Red Sea, two oceans, Gibraltar, the coast of Italy, the Suez Canal, Cape Guardafui, the cities of Mombasa and Nairobi, the Tsavo plain, the Rift Valley and the source of the Nile, with every kind of wildlife on the ground and in the air. After having travelled by ship for weeks, by train for days and, eventually, by car for hours they arrived in the little village in the middle of the bush north-west of Kampala that they would call home for many years to come.

They lived in a bungalow made of bricks, one of the few buildings of the village, the others were the school where Frank was employed, the church, the Parish house and another couple of houses where some families lived. No running water, no electricity, no gas, at least at the beginning. How Olwen managed to bring up four and later five and six children in those conditions is another story.

She had help for the household chores, while she dedicated most of her energies to the children, especially homeschooling them and doing a jolly good job indeed.

Many years later, when they moved to Kampala, she was able to get a job outside the home, but it was only in the last years of their stay. 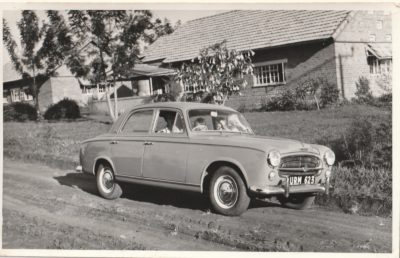 “I would have never learned to drive, had I remained in England”

She was also an excellent cook, baker, sewer, knitter, embroider and dress maker. In her free time she read books, daily local newspapers or one-week-old British newspapers. She also enjoyed writing letters to family and friends in the U.K., but she used telegrams for urgent matters, along with meeting the new friends she had made. The opportunity to borrow a car (and later even to buy their own) allowed the family to explore the area and experience a good deal of adventure, including driving a woman of the village to the nearest hospital, for she was in labour… and being too late!

There would be so much to tell about her pregnancies, miscarriages and births; about sending the children off to boarding school and to college and letting them go and live their lives, seeing them getting married to people from different cultures. Indeed, her life between different countries was not always easy. As when her first daughter got married and she could not be there in Ireland, or when she had to travel to Italy for her first son’s funeral. 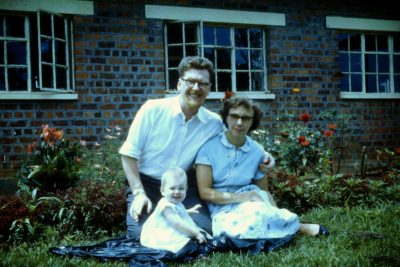 As with all good stories, her expat experience did come to an end. What she didn’t know when she went back to Britain was that her travelling was far from being over.

After their return to England, Olwen and her husband visited regularly their children spread over four or five countries in two continents.

Time went by and unhappy events came along. Decisions had to be taken and some regarded her personally. She needed care and warm weather, so – by now almost ninety – she stepped for the last time on a plane flying back to the place where she had lived her greatest adventure, migrating like a bird for the longest winter of her life. Guest in her daughters house, a widow too, two dark skinned angels took care of her with respect and devotion, calling her Mama. 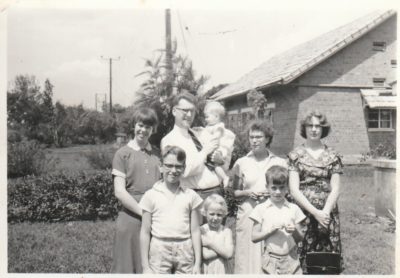 She suffered the pain of forgetting who she was, not being able to recognise even the children she had carried to life. But she did not forget her manners, even in the darkest times she always answered an offer of a cup of tea with a “yes, please” or “no, thank you”. She passed away aged 94, surrounded by love and dignity, under the sky of Kenya.

Only in Naples, a food memoir by Katherine Wilson

? We are joking of course, but there is something we would like to tell you. You might have noticed that Expatclic has no ads or paywall. For 17 years we have been working voluntarily to provide quality contents and support to expat women all over the world. However, keeping such a big website going has some costs, which we partially cover with team member’s fees and donations of those who appreciate us and wants our work to continue. If you could give even a tiny contribution to cover the rest, we would be immensely grateful ♥ You can support us with a small donation, even a small one. Thank you so very much.
10 February 2021 at 13:35
Africa, Kenya, Testimonials
abroad, different culture, expats, family, motherhood abroad
Barbara Amalberti
Subscribe
Login
0 Commenti
Inline Feedbacks
View all comments

Only in Naples, a food memoir by Katherine Wilson