Claudiaexpat tells us about her visit to the Gallery and Workshop of Vivianna Torun Bülow-Hübe, a Swedish silversmith that spent almost thirty years in Jakarta.

I recently visited the Adhara Silver Gallery and Workshop in Jakarta, and was very impressed by the elegance and finesse of the jewellery they produce. I discovered that Vivianna Torun Bülow-Hübe, a Swedish silversmith and master jeweller, was the creator behind the designs which are now legendary all over the world. However, few know that she actually lived in Indonesia from 1976 to 2003, before returning home to Europe where she died of leukaemia. 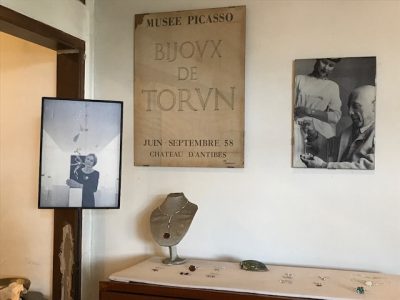 A true expat at heart, Vivianna lived in France with her third husband, first in Paris and then in the South of France. When she divorced, she moved to Germany and then to Indonesia where the Subud movement (of which she became a member) was founded.

Her works attained international fame and were worn by artists like Ingrid Bergman, Brigitte Bardot and Billie Holiday. Pablo Picasso held an exhibition of her designs in his museum in 1958. Vivianna received many awards, amongst which were a gold medal, the Milano Triennale, and the American Lunning Prize for design.

When visiting her gallery, her fame is not the first thing that comes to mind. The workshop is small and simple, with few jewels on show. This modest but intimate space now hosts Vivianna’s works alongside jewels of Utami, an Indonesian jewellery maker. The ladies who work there are lovely and speak passionately about the life and works of Vivianna.

It’s like jumping back in time when they take you to the studio that was once Vivianna’s. You can still see her desk and dummy, kept exactly as they were. There is an old cupboard that still contains all her prototypes. I took a moment to take in the atmosphere and think of how this woman must have felt, recreating an artistic and social universe in a place so far from her native Europe. 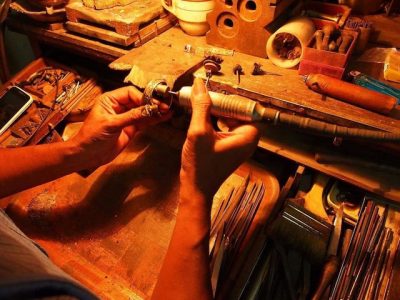 The most striking thing though, is entering the workshop where the silver is worked today. Vivianna’s jewels are still produced in exactly the same way they were when she was alive. Most of her workers continue to work there even to this day. They showed us the whole process of creating a silver necklace. It was fascinating to watch little crumbs of silver and copper being melted and then poured into a mould to create a little bar. The little piece of silver is then worked on and coaxed into the shape of a thin, long line until it takes on the form of an elegant necklace. The process reminded me of my grandmother making fresh pasta on Sundays.

The tools, furniture and atmosphere are all old, but the passion these men put in crafting some of the most elegant and beautiful jewels ever seen in Jakarta, still remains. The studio is a fascinating little place and certainly worth a visit.

? We are joking of course, but there is something we would like to tell you. You might have noticed that Expatclic has no ads or paywall. For 17 years we have been working voluntarily to provide quality contents and support to expat women all over the world. However, keeping such a big website going has some costs, which we partially cover with team member’s fees and donations of those who appreciate us and wants our work to continue. If you could give even a tiny contribution to cover the rest, we would be immensely grateful ♥ You can support us with a small donation, even a small one. Thank you so very much.
27 July 2017 at 8:09
Indonesia, Work Abroad
career abroad, expat life, Jakarta, life abroad
claudiaexpat